The best online art classes in 2021 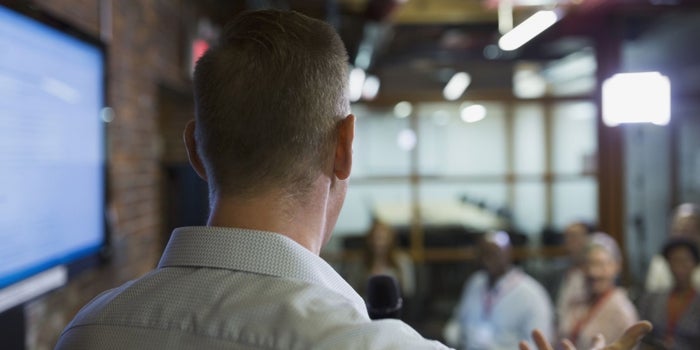 The classic, textbook speaking formula applies: Tell your audience what you’re going to tell them, tell them, then tell them what you told them. This lets you first create a sense of anticipation, getting the audience sitting on the edge of their seats and hanging on every word. Most of the great stage magicians of the golden era, Houdini included, always told the audience about the illusion they would next see, in very dramatic terms — they didn’t just go out on stage and perform the trick. At the other end, you summarize what you’ve told and shown them, because people tend to very quickly forget key points of any complex presentation.

Small commitments lead to more substantial commitments. Resistance is better erased a little bit at a time. As a presenter, your goal is to have people say yes to you, mentally and physically, a number of times during your presentation. You can involve people by getting them to raise their hands, yell a word or phrase of agreement — “Yes” will do, even getting “All those who…” to stand up. With most audiences, there’s limited response to the first attempt at this, and you have to joke with them and cajole them to get more of them to play.

At Speaking Empire, we usually build some “Yes” questions, requests for agreement and moments into every presentation.

A lot of things can affect the audience’s state: who they are, how they came into the audience — willingly or “sent” by an employer — time of day and fatigue, what they know in advance about you and your presentation and location. This hands you two responsibilities: first, to do what you can to help get them into a positive mental attitude about you and your presentation’s benefits and benefits of benefits before they are actually with you. Second, to be able to “take the temperature” of a group and make some adjustments on the fly if it’s cold, to warm it up.

The one thing never to do is to leave an audience’s mental and emotional state to random chance and try to deal with it in a single leap over a tall wall toward the end of your presentation.

Have you ever seen a speaker start strong but lose his audience sometime during his presentation? The audience starts slumping, fidgeting, and even looking at their phones — at worst, getting up and leaving — one after another. In making Speaking Empire the go-to company for developing powerful presentations, we’ve done a lot of research, as well as drawn from our own experience. One of the areas where there’s a lot of research to be had is in the neurosciences. One fact for which there is consensus is that the human brain can only maintain focus for seven minutes. It basically fades, stops and restarts in seven-minute cycles. That’s why you need to get your audience to re-engage with you every seven minutes.

Few effective speakers stand still behind a podium or lectern, or read a word-for-word speech from notes or a teleprompter — it doesn’t have enough life to it. Audiences are affected as much or more by how you say what you say as they are by what you’re saying. That “how” includes voice, confidence, enthusiasm, whether or not you seem to be happy to be in front of them delivering your message and physical movement. In many ways, you’re a performer delivering a performance.