A JPG Just Sold For $69 Million, Making It The Most Expensive NFT Yet - International Burch University

A JPG Just Sold For $69 Million, Making It The Most Expensive NFT Yet 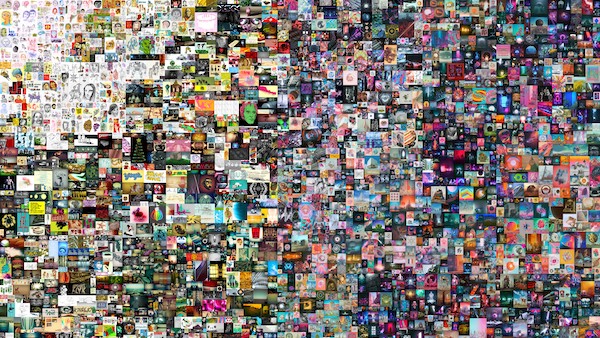 After a daunting and unpredictable year, creatives are regaining momentum through the world of crypto art. Non-fungible tokens (NFTs) are now a force to be reckoned with—so much so that a single JPG file sold for US$69.3 million with fees from auction house Christie’s on Thursday.

Whether it was a stroke of beginner’s luck or a signal of a new enduring source of income for artists, Christie’s very first wholly digital NFT, Beeple’s Everydays — The First 5000 Days, drew over 180 bids in the final hour. The amount had remained at under US$30 million just seconds before the sale closed, but a flurry of bids coming in during the final moments pushed Christie’s to extend the online auction by two extra minutes, the New York Times reports.

The self-taught artist behind the work, whose real name is Mike Winkelmann, started uploading a new piece of art every day since 2007. The historic artwork is a collage of Winkelmann’s creations from the first 5,000 days.

At US$69.3 million,Everydays — The First 5000 Days, is the most expensive digital asset to come with a digital certificate of authenticity. Further, it now stands as the third-most expensive work from a living artist to be auctioned off, following only after Jeff Koons and David Hockney, Christie’s representive Rebecca Riegelhaupt told the Times.

The digital artwork also tops the highest anyone has ever bidded for work by Frida Kahlo, Salvador Dalí, or Paul Gaugin, according to the Wall Street Journal.

Interest in NFT art has climbed spectacularly in the past month, with a GIF recently selling for half a million dollars and a Banksy piece being remixed to be sold as a digital artwork.