Thousands of emails from and to Fauci during the pandemic’s early days were published. Here’s what they show about him

American democracy is about to show if it can save itself 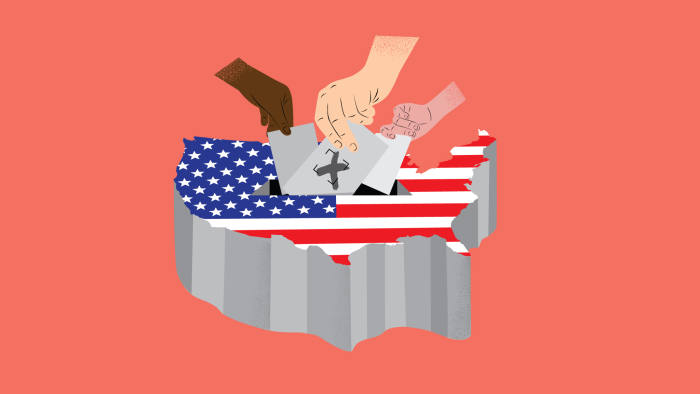 (CNN)American democracy — under a relentless, multi-front assault from pro-Donald Trump Republicans — is about to show whether it is strong enough to save itself.Such a premise would have been considered absurd through much of history. But since Trump left office after destroying the tradition of peaceful transfers of power in a failed attempt to steal the 2020 election, it has become clear that his insurrectionism was only the first battle in a longer political war as his allies tout ridiculous fantasies about returning him to power to applause and online acclaim.The mechanisms of American institutions that barely survived Trump’s attempt to illegally stay in power are still being manipulated by Republicans to make the country less democratic. The GOP’s efforts to stack the electoral decks are staggeringly broad. From Georgia to Arizona and Florida and in many other states, Republicans are mobilizing behind efforts to shorten voting hours, crack down on early and mail-in balloting and to throw out legitimate ballots — all under a banner of election security.While Trump may be banned from Twitter, he sends out daily statements pulsating with lies and incitement that percolate among supporters on social media. The ex-President’s planned resumption of rallies next month will bring that anti-democratic stream of falsehood to a wider audience.And in the US Senate, Republicans will use filibuster rules — which critics see as the antithesis of democracy — to thwart Democratic legislation that seeks to combat all those efforts.President Joe Biden, who is in the White House because American democratic guardrails stood firm after his victory last November, raised the alarm on Tuesday after another bout of the GOP flexing its anti-democratic muscles. Just as Republicans are using the institutions to damage democracy, Biden and Democrats are targeting new laws that they believe would preserve it.

Biden tasked Vice President Kamala Harris with leading an effort to protect the right to vote. “This sacred right is under assault with incredible intensity like I’ve never seen … with an intensity of aggressiveness we’ve not seen in a long, long time,” Biden said in Tulsa, Oklahoma. The President was marking the 100th anniversary of a massacre of Black Americans, a scar on US history that he implicitly placed in the wider struggle of generations to perfect US democracy.But time is short to reverse democratic rollbacks by Republicans that are already causing fears that GOP officials could overturn future elections if their candidates are rejected in a majority vote. Trump tried to do exactly this with his unsuccessful pressure on local officials to steal the 2020 election in Georgia. The GOP capture of the House in 2022 midterm elections could make such a stolen election scenario a real threat in 2024.”By the time we get to the 2024 election, my fear is that election will be sent to the House of Representatives to decide if there are disputed electors,” Daniel Ziblatt, a Harvard professor and co-author of the book “How Democracies Die,” told CNN’s Jake Tapper on “The Lead.””You could very well imagine a situation where the 2020 and the 2021 January crisis was a dress rehearsal for what’s to come in 2024.”

As Democrats try to prevent that happening, the Senate will shortly consider sweeping voting rights laws designed to establish national standards on issues like early voting, and to restore protections for Black voters removed by the Supreme Court and GOP legislators.A preview of that battle in Washington is currently playing out around the nation in the country’s statehouses, most recently in Texas.Democratic state lawmakers in the Lone Star State walked out of their chamber over the weekend to deprive their Republican colleagues of a quorum needed to pass a restrictive voting bill built on Trump’s Big Lie of election fraud.But Greg Abbott, the Republican governor of Texas, is vowing to call lawmakers back in a special session to pass the legislation and threatening to halt their pay over the walkout. He collected his reward on Tuesday with a reelection endorsement from the former President.The two voting rights bills in the US Senate face an unpromising future, since Republicans are vowing to halt what they are branding a Democratic power grab. Several Democratic senators, including West Virginia’s Joe Manchin and Arizona’s Kyrsten Sinema, would have to drop their firm opposition to abolishing or amending supermajority filibuster rules for the bills to pass.For the second time in a week Tuesday, Biden — who preaches national unity and bipartisanship and has treated Manchin with kid gloves — flashed irritation about the limitations of deadlocked Washington politics. Last week he held up a list of GOP senators who voted against his Covid-19 rescue law but claimed credit for some of its provisions among their constituents. In Tulsa, the President aimed an apparent swipe at Sinema and Manchin.”I hear all the folks on TV saying, ‘Why doesn’t Biden get this done?’ Well, because Biden only has a majority of effectively four votes in the House and a tie in the Senate, with two members of the Senate who vote more with my Republican friends,” he said.

It is not clear, given these apparently cemented political realities, exactly how Harris can turn back the tide of challenges to democracy. She could bring more visibility to the cause and perhaps help to organize popular opposition to restrictive voting bills. And she could be a powerful galvanizing force for Democratic turnout in 2022 that could make an end run around some new laws.But the entrenched reality of Republican power in many states and the obstructive mechanism of the Senate makes progress difficult. Harris may be able to test whether there is scope for a reworking of bills like the For the People Act to attract the support of more lawmakers. But there is concern even among some Democrats that the legislation is too broad, including as it relates to campaign finance regulations. It is highly unlikely she can persuade Republicans to vote for a measure that would reverse many state-level efforts to fortify their chances against demographic changes that threaten to consign White, conservative, religious Americans to permanent minority status.The vice president is however promising to devote energy to a task that Biden said on Tuesday would “take a hell of a lot of work.”In a statement sent first to CNN, Harris said she would “work with voting rights organizations, community organizations, and the private sector to help strengthen and uplift efforts on voting rights nationwide. And we will also work with members of Congress to help advance these bills.”A second bill — The John Lewis Voting Rights Act, also passed by the House of Representatives — is awaiting Senate action. The measure would restore a requirement for states with a record of racial discrimination in elections to submit changes to electoral laws to the federal government for review. The protections were gutted by a 2013 Supreme Court ruling that opened the way for a raft of current efforts to prejudice the rights of minority voters.

While the GOP seeks to tilt elections, some of its members are pressing ahead with a whitewash of the 2020 contest.Wisconsin Sen. Ron Johnson, adding to the growing blanket of denial around Trump’s Capitol insurrection on January 6, says he’s conducting his own investigation to create an “accurate historical record” after voting against a bipartisan, independent probe into the outrage that would have done just that.The Republican filibuster blockade against the commission was a transparent attempt to protect Trump from further damaging revelations, after the ex-President all but ordered GOP leaders in the Senate and House to oppose it.But the attempt to pervert American democratic freedoms is not limited to elected Republicans. Former Trump national security adviser Michael Flynn indicated over the weekend the US needed a coup like the one in Myanmar.The Southeast Asian nation has been ruled by a paranoid and brutal military junta for much of the last 60 years. In its most recent coup, it moved to thwart a tentative path towards full democracy and the military has opened fire on hundreds of peaceful protesters and detained many more in inhumane prisons where torture is rife.Flynn later tried to walk back his comments, but the lack of any condemnation by senior Republican figures of his actions reflects a party wherein extremism is tolerated and therefore grows.Asked how worried he was about American democracy on a scale of 1-to-10, Ziblatt replied, “Eight,” and pointed out that Trump had never been supported by a majority of Americans. But he also explained to Tapper why the current raft of anti-democratic actions in US institutions by Republicans was so concerning.”As long as the majority can speak, democracy is safe,” Ziblatt said.”I think the thing we have to worry about is that the institutions are being manipulated in a way to try to create a much more uneven playing field and that would be very dangerous.”