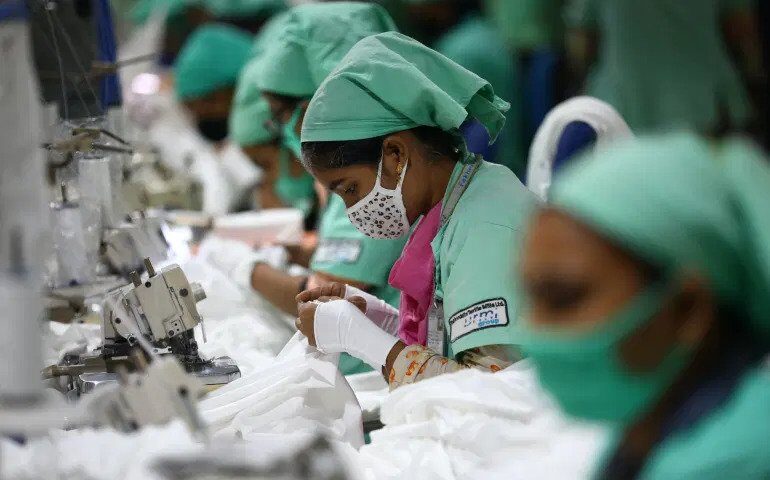 The apparel sector employs over 60 million workers worldwide, according to the World Bank Group. And while 97 percent of fashion and retail brands have codes of conduct and corporate social responsibility (CSR) standards, such policies are neither effective in preventing forced labour nor in ensuring remedy outcomes for workers, according to advocacy group KnowTheChain.

KnowTheChain’s 2021 Apparel and Footwear Benchmark Report (PDF) recently ranked 37 of the world’s biggest fashion companies on a scale of 0 to 100 on their efforts to fight forced labour, with 100 representing the best practices.

The group identified allegations of forced labour in the supply chains of 54 percent of companies it examined.

“What stood out to us is that the average score for the sector was 41 out of 100, which constitutes a significant failure to address risks,” Felicitas Weber, project director at KnowTheChain, told Al Jazeera.The report also found that the world’s largest luxury brands are among the worst offenders in addressing the worse forms of exploitation in their supply chains, with an average score of 31 out of 100.

Kering, LVMH and Tapestry did not respond to Al Jazeera’s requests for comment.

Italian luxury fashion house Prada ranked at a mere 5 out of 100 on KnowTheChain’s benchmark, and its score has worsened over time.

But in a statement to Al Jazeera, Prada Group said it strives to push its standards higher and challenged KnowTheChain’s methodology.

Prada claims KnowTheChain does not take into account the fact that most of Prada’s factories are located in Italy, which allows it to closely monitor and address any misconduct or violations.

By continually demanding shorter turnaround times and lower prices from their suppliers and fuelling competition among supplier factories, fashion and retail brands make it difficult for factory owners to adhere to labour laws and standards, she explained.

“This dynamic has been exacerbated by the coronavirus pandemic, when apparel brands sought to minimise their economic fallout by abruptly cancelling orders from their supplier factories, which led to mass layoffs, pushing workers towards the brink of destitution,” Kyritsis said.

For example, in Bangladesh, the second-largest employer of garment workers after China, more than one million garment workers – mostly women – were fired or temporarily let go when fashion brands cancelled orders during the height of last year’s pandemic shutdowns, according to research (PDF) conducted by Penn State University’s Center for Global Workers’ Rights.

While it is unclear exactly how many migrant workers and refugees are employed in the garment sector, they do make up much of the workforce across all regions, KnowTheChain told Al Jazeera.

For example, garment factories in Malaysia, Thailand and Taiwan heavily rely on workers from neighbouring countries, according to the Clean Clothes Campaign.

Jordan’s garment industry is estimated to employ nearly 70,000 workers, 53,000 of whom are migrants, the IndustriALL Global Union found in 2019. And Brazil’s Sao Paulo textile sector is known to employ an estimated 300,000 Bolivian workers, according to nongovernmental organisations cited in a report by the Business & Human Rights Resource Centre.

Migrants are often more vulnerable to abuse and exploitation, as they are often employed under informal agreements, are undocumented or lack adequate protection under the law.

“Migrants sometimes have to pay up to a year of their salary just as a fee to get the job, so really [it’s] quite extortionate,” KnowTheChain’s Weber explained. “We’ve seen more companies that reimburse these fees, but we need companies to step up significantly and not just take a baby step each year.”

While the ability to organise and challenge exploitative working conditions is crucial, thousands of unionised garment workers were reportedly targeted for dismissal due to union membership and organising during the pandemic, according to KnowTheChain.

More broadly, companies in the industry need to be able to “know and show” their supply chains – and that means mapping and publishing the names of the suppliers they are working with at all levels, Weber said.

Exploitative working conditions thrive in countries where labour laws and enforcement are weak, but many fashion brands based in Europe and the United States continue to try and evade responsibility for what happens further down their supply chain, Chloe Cranston, business and human rights manager at Anti-Slavery International, told Al Jazeera.

Cranston cited the example of goods made using forced labour from members of the Uighur Muslim minority in China’s Xinjiang region.

A recent Amnesty International report documented the mass imprisonment and systemic torture of Uighur Muslims living in China, including through first-hand accounts. Some of those accounts detail forced labour and Uighurs being “required to live and work in a factory”.

“Almost the entire fashion industry is implicated in Uighur forced labour, through yarn or cotton sourcing, for example,” Cranston said.

On Tuesday, the United States issued an updated business advisory warning companies doing business in Xinjiang that they faced a heightened risk of falling afoul of US law due to the “growing evidence” of forced labour in the region, as well as other human rights abuses and “intrusive” surveillance.

The administration of former US President Donald Trump  banned all cotton products from Western China’s Xinjiang region over allegations that they are made with forced labour from detained Uighur Muslims. The US, Canada, European Union and United Kingdom have also sanctioned Chinese nationals over the abuse allegations.

“We’ve seen some progress around this in the past year, yet the sad reality remains that the fashion industry still has a long way to go to ensure it is not complicit in the crimes against humanity suffered by Uighurs,” Cranston said.

Fashion and retail companies have significant corporate power, she stressed, and they have a responsibility to ensure that the way they work with suppliers, trade unions and labourers allows for decent working conditions for people up and down their supply chains – from those harvesting raw materials like cotton to those spinning them into fabric in factories.

“It shouldn’t be the burden of a consumer to try and guarantee a slavery-free purchase,” Cranston said.