As the Hamas-Israel cease-fire holds in Gaza, residents survey the damage 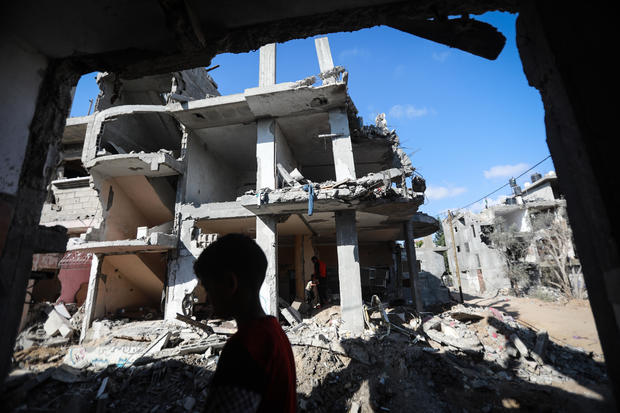 The cease-fire between Hamas and Israel was holding on Monday.

Gaza took the brunt of the violence during the eleven- day conflict that ended on Thursday.

But CBS News correspondent Holly Williams, who’s in Gaza, says even though the bombing there has stopped, the devastation is far from over.

The sheer force of the Israeli airstrikes levelled two apartment buildings she surveyed.

Locals told her more than 40 people died there.

The Israeli airstrikes also damaged the Gaza strip’s infrastructure, and many people there are now struggling to get clean running water and reliable electricity.

Sara, who’s four years old, has a spinal injury — collateral damage in a war she’s too young to understand.

Her mother, Leena Matrabea, said, “We felt an explosion over our heads. I picked her up and ran to the street. What did she do to deserve this?”

Before the conflict, Sara laughed while playing on a trampoline.

Her father, Zaher, is living every parent’s worst nightmare – he couldn’t protect his own child.

As Israelis and Palestinians descended into violence once again, more than 250 people lost their lives — the vast majority of them here in the Gaza Strip – where officials say almost 70 of those killed were children.

On the streets of Gaza, they’re still sifting through the wreckage of splintered homes — and lives.

And yet Hamas celebrated the ceasefire with a victory parade.

They govern the Gaza Strip and are classified by the U.S. as a terrorist organization.

Israel says more than 4,000 rockets were fired at its towns and cities, killing 12 civilians.

Dr. Basem Naim, the head of international relations for Hamas, told CBS News that another conflict is inevitable if Israel continues to oppress Palestinians.

“I don’t know how long we have to wait. Maybe one month, two months, two years, five years. But it will erupt again, and we will have another round of escalation,” he said.