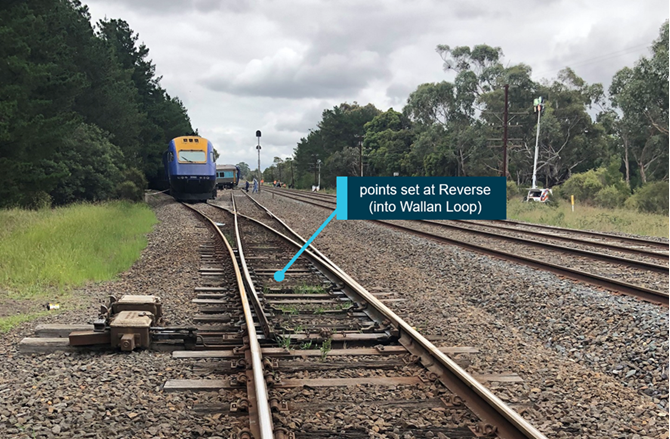 A train that derailed in Victoria, Australia, was travelling more than eight times the speed limit through a rerouted section of track, according to the interim report on the accident.

The interim report – published today – has found that the train entered a rail loop at Wallan travelling at almost 130km/h despite a 15km/h speed limit being in place.

Following the accident, the Rail, Tram and Bus Union raised concerns about the section of track, which was undergoing maintenance, saying drivers for the Victorian regional train service, VLine, were refusing to drive on it.

The union’s state secretary Luba Grigorovitch said that due to the maintenance, “conditions were altered and V/Line drivers rightly refused to traverse this section over the past week [before the accident]”.

According to the interim report – published by the Australian Transport Safety Bureau (ATSB) – the rail signalling system for the standard-gauge track through Wallan had been damaged on 3 February 2020.

As such, on the day of the derailment, the points at either end of the crossing loop at Wallan had been manually reconfigured to divert rail traffic through the loop, which necessitated the 15km/h speed limit.

ATSB chief commissioner Greg Hood said: “Today, in releasing an interim report, the ATSB is detailing factual information as to the circumstances of this tragic accident as we understand them, and outlining planned safety actions as proposed by ARTC – the rail infrastructure manager – and NSW Trains, the rail operator.

“It is important not to draw conclusions from the factual information detailed in this report as there remains a significant body of further analysis work prior to concluding this investigation. Instead, the interim report serves to detail the investigation’s progress to date and to update stakeholders and the travelling public as to our areas of on-going investigation.

“Findings, safety factors and contributing factors will be detailed in the final report, which is anticipated to be completed in the first quarter of 2022.”

Hood said that the ATSB has made eight interim observations of the factual information detailed in the interim report.

“These observations are based upon evidence gathered as part of the investigation, and have been used in the report to highlight and clarify certain items of factual information,” he said.

“Among the observations are those pertaining to ARTC’s implementation of altered train working arrangements and risk management, as well as NSW Trains’ distribution of safety information to rail workers.”

Since the accident, ARTC has advised it is developing amendments to its code of practice for traffic management, and is modifying its risk assessment practices, while NSW Trains is making changes to its procedures for accessing and distributing safety critical information to train crews.

Other areas of ongoing investigation include the management of train operations and associated risk management, the distribution of safety critical operational information to train operators and crew, further human factors analysis and rail vehicle survivability and crashworthiness standards.

The investigation team will also finalise their analysis of the derailment sequence and their assessments of the condition of the rolling stock and track conditions. Passenger services crew training and preparedness for a derailment and passenger safety information will also be reviewed.