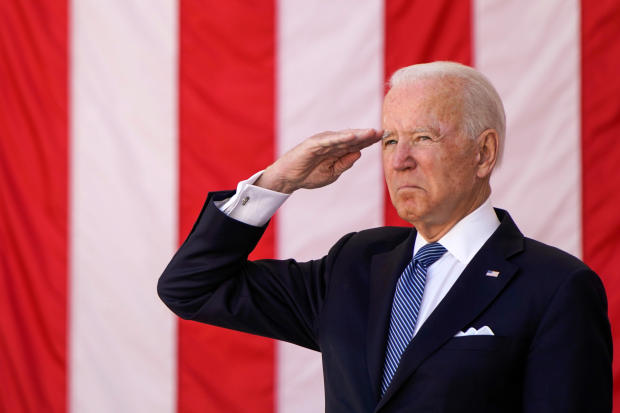 President Biden said how America honors the memory of its fallen service members “will determine whether democracy will long endure” in a Memorial Day address at Arlington National Cemetery. The president, who lost his veteran son, Beau, to cancer in 2015, said he recognized the pain so many American families feel on this day.

For years, Mr. Biden has carried around a card stating the number of Americans who have died in the wars in Afghanistan and Iraq. Today, he said, that number is 7,036.

“To all of you who are fighting with the fresh pain of loss, as hard as it is to believe, I promise you this, the day will come when the image of your loved one brings a smile to your lips before it brings a tear to your eyes,” the president said. “The Bible teaches, ‘Blessed are they that mourn, for they shall be comforted.’ That comfort, that reassurance, can be a long time in coming, but it will come, I promise you.

Mr. Biden emphasized America is an “idea” dependent on a commitment to freedom and justice in each generation. It’s a theme the president emphasized often on the campaign trail and has still as president.

“The soul of America is animated by the perennial battle between our worse instincts, which we’ve seen of late, and our better angels. Between ‘me first’ and ‘we the people.’ Between greed and generosity, cruelty and kindness, captivity and freedom,” he said.

The president often insists now is an inflection point in American and world history, in a battle between democracy and authoritarianism.

“Democracy itself is in peril, here at home and around the world,” the president said. “What we do now, what we do now, how we honor the memory of the fallen, will determine whether democracy will long endure.”

The country must not, and will not, forget those who gave their all for freedom, the president said, as he called on Americans to honor their sacrifice.

“This Memorial Day, remember that not all of us are called to make the ultimate sacrifice,” he said. “We all are called by God and by history and by conscience to make our nation free and fair, just and strong, noble and whole. For this battle may we now dedicate our souls, that our work may prove worthy of the blood of our fallen. For this work, the work of democracy, is the work of our time, and for all time.”

In the audience for Mr. Biden’s remarks were families from the veterans nonprofit Tragedy Assistance Program for Survivors and members of the military.

After his speech, the president made a stop at Section 12 in the cemetery, speaking with two adults and a boy and a girl. He then continued walking and greeted another family, posing with them for a picture.

Before his address, the president saluted the Tomb of the Unknown Soldier and bowed his head. Defense Secretary Lloyd Austin saluted the tomb, and Vice President Kamala Harris placed a hand over her heart.

Visiting Arlington and the Tomb of the Unknown Soldier is tradition for presidents on Memorial Day.