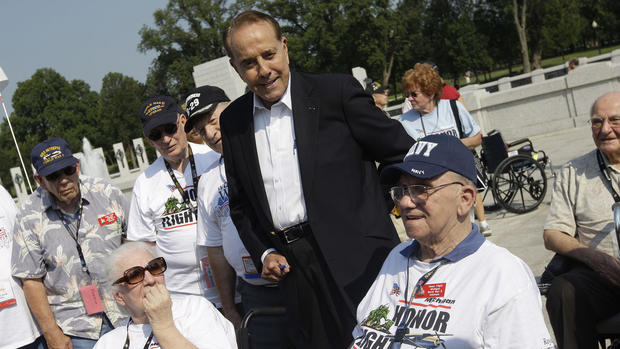 As displayed when paying homage at the funeral of President George H.W. Bush, former Senator Robert Dole of Kansas has always been known for his fortitude. So, it comes as no surprise that he is taking his diagnosis of stage 4 lung cancer in stride.

A citizen with a lifetime of public service behind him. Senator Dole, and his wife, Elizabeth (herself a former Senator and Cabinet member) recently talked with correspondent Rita Braver about his storied career.

“He has these values,” Elizabeth said, “that I think were forged in that little town, in Russell, Kansas, by a wonderful, caring, loving family.”

Dole was a high school athlete who wanted to be a doctor, but World War II intervened. He was a young Army Captain, advancing against German fortifications in Italy when, Elizabeth explained, he was hit by German gunfire: “They crushed his right shoulder, his spinal cord was injured.  And he actually, Rita, he lay on the battlefield for 10 hours.”

Bob Dole lost the use of his right arm, and would spend three years recuperating.  But what he focuses on is the support from his hometown, symbolized by a cigar box: “My friends in Dawson’s Drugstore in Russell, Kansas, when they heard that I was wounded, they passed the box around and kept it on the counter, and asked people to give money,” Bob said.

Braver asked Elizabeth, “When you decided to marry him, did he ever say to you, ‘Look, you know, you’re getting somebody who’s got some limitations’?”

“He never said that to me, but let me share with you what happened when we were visiting my parents in North Carolina. Bob left his bedroom, and he had a towel over his shoulder that had been crushed.  He walked up to my mother and he said, ‘Mrs. Hanford, I think you should see my problem.’ Mother looked at Bob and she said, ‘Bob, that is not a problem, it’s a badge of honor.’ What that says about the character of both of those dear people that I love so much!”

“You just fell for him?”

Bob and Elizabeth Dole married in 1975. He has one daughter, Robin, from his first marriage.

He had decided on a life of public service while still recovering from his wounds: “I figured out that lying in bed the rest of my life was not an option,” he said.

Bob Dole was elected to the House of Representatives in 1960, and the U.S. Senate in 1968.  But Americans really got to know him in 1976, when President Gerald Ford introduced Dole as his running mate in 1976. The Gerald Ford-Bob Dole ticket would lose to Jimmy Carter and Walter Mondale. Dole ran, unsuccessfully, for the Republican presidential nomination in 1980, and again in ’88.  But he did win a key race in the Senate in 1984, becoming Party Leader.

Dole was a mainstream Republican, advocating for lower taxes and smaller government, but he worked with Democrats on issues like saving Social Security, and supporting civil and disability rights. In fact, both Doles always prided themselves on working across the aisle, something that is rare these days.

Braver asked Elizabeth, “Do you feel like you are in step with today’s Republican Party?”

“Where the party’s concerned, it’s the divisiveness that concerns me,” she said. “We’ve got to get past that.”

Braver asked Bob, “Senator, some people were surprised that you supported President Trump’s re-election, given how different your tone and your approach to life is.”

“Yeah, if he could’ve used my tone, he might’ve been re-elected!” he said. “He had some good policies.”

But Dole quickly accepted the fact that Joe Biden won the election. “The election was over, as much as many of us Republicans wish that it’d gone the other way, but it didn’t,” he said.

In fact, Bob Dole has personal experience losing a presidential election. He was bested by President Bill Clinton in 1996, but quickly rallied. Elizabeth said, “Bob Dole is a fighter. You can’t hold him down. He’s going to bounce back. The third day after he had lost the election, he goes on the Letterman show.”

David Letterman: “Bob, what have you been doing lately?”
Dole:  “Apparently, not enough, in any event!”

Today, Dole has a friendly relationship with his former Senate colleague, now President Joe Biden, who paid a call after hearing news of Dole’s cancer.

“You don’t have to agree with all of his policies,” he said. “But you can’t really find someone who’s decent and fine, and that’s Joe – oh, that’s Mr. President.”

And it was Dole’s old rival, President Clinton, who, in 1997, made this announcement: “I am pleased to be able to recognize Bob Dole’s record of achievement, with the highest honor our nation can bestow on a citizen: the Presidential Medal of Freedom.”

Mr. Clinton also asked Dole to lead the effort to build the National World War II Memorial. Dole helped raise some $170 million in private funds, and would frequently visit the memorial to greet fellow veterans – just one of many good works he carried out after leaving the Senate.

He said, “My pledge one time was to make a difference in the life of at least one person every day. Now, I probably failed part of that, but I still work at it.”

And Senator Bob Dole plans to KEEP working at it: “I don’t intend to go quietly, but that’s up to a higher level,” he said. “I want to try to make 100.”