China says relations with US are deadlocked at high-level talks 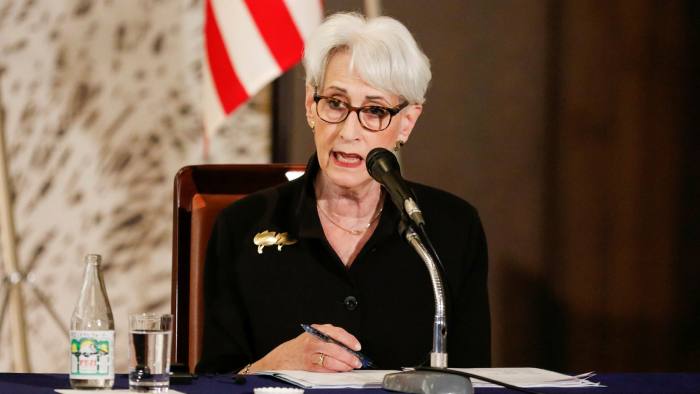 Please use the sharing tools found via the share button at the top or side of articles.China says relations with US are deadlocked at high-level talks Copying articles to share with others is a breach of FT.comT&Cs and Copyright Policy. Email [email protected] to buy additional rights. Subscribers may share up to 10 or 20 articles per month using the gift article service. More information can be found here.
https://www.ft.com/content/7e9854b9-b821-495f-a217-44c636606732

Sino-US relations are mired in a dangerous “deadlock”, a senior Chinese diplomat said on Monday, as talks with his US counterpart got off to a combative start in the port city of Tianjin. Vice foreign minister Xie Feng’s meeting with Wendy Sherman, US deputy secretary of state, was the first face-to-face meeting between the countries’ senior representatives since March, when their respective top foreign policy officials sparred openly in Anchorage, Alaska.

“China-US relations are currently at a deadlock and face serious difficulties,” Xie said, according to a copy of his remarks posted on the foreign ministry’s website. He added that the US “wants to reignite a sense of national purpose by establishing China as an ‘imaginary enemy’”, and urged Washington to change what he called its “extremely dangerous China policy”. Relations between the world’s two biggest economies have remained tense in recent months despite the hopes of some that Joe Biden’s election would lead to a recalibration. Sherman’s stop-off in Tianjin was added to her itinerary at the last minute, after a trip that included stops to Japan, South Korea and Mongolia. The US was reluctant to agree to a China visit unless Sherman would also be received by Wang Yi, China’s foreign minister, whom she was expected to see later on Monday. The meeting in Alaska had descended into a rare public slanging match, with Yang Jiechi, China’s top foreign policy official, warning Antony Blinken, secretary of state, that the US could no longer lecture Beijing “from a position of strength”.

Yang also accused the Biden administration of “inciting countries to attack China”. Xie’s robust comments came days after Beijing imposed sanctions on seven Americans, including former commerce secretary Wilbur Ross, in retaliation for similar US moves against seven Chinese officials for their alleged role in the suppression of Hong Kong’s pro-democracy movement. Recommended News in-depthUS-China relations China is defying US pressure to change its behaviour But the Biden administration also announced last week that it was dropping visa fraud charges against five Chinese researchers in the US. A trial involving a researcher allegedly affiliated with the People’s Liberation Army had been scheduled to begin in California on Monday. Sherman’s visit is part of a broader US effort to increase engagement with China ahead of a possible meeting between Biden and Xi Jinping,

China’s president, on the sidelines of the G20 leaders’ summit in Italy in October. “The two sides will keep fighting but should still be able to talk about concrete issues like the possibility of a presidential summit,” said Shi Yinhong, professor of international relations at Renmin University in Beijing. The Biden administration was initially reluctant to agree to a series of meetings with senior Chinese officials, as it focused on trying to convince European and Asian allies to jointly confront Beijing on a wide range of human rights, trade and foreign policy issues.

That campaign will continue this week as other senior administration officials court countries across the Indo-Pacific region. Lloyd Austin, US defence secretary who has unsuccessfully sought meetings with his Chinese counterpart, will give a speech in Singapore on Tuesday. Austin is also scheduled to visit Vietnam and the Philippines this week. Blinken is scheduled to fly to India, a member of the “Quad” alongside Australia and Japan. Donald Trump, the former US president, had attempted to revive the grouping to counter China’s influence across the region. Additional reporting by Xinning Liu in Beijing