To you I owe the most: tales of debt from Shakespeare’s England to the present day 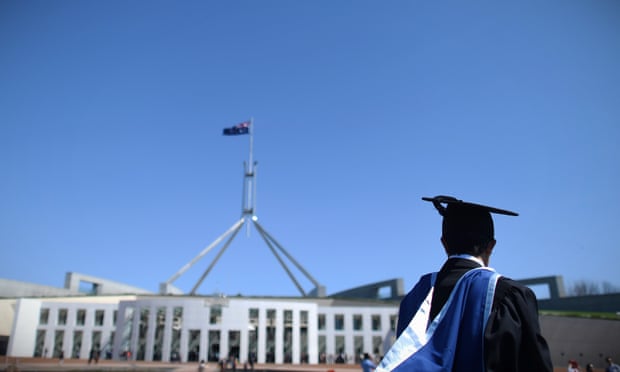 Australian universities are failing students and leaving them unprepared for the future job market by cutting courses in Asian languages, according to teachers and experts.

Four university-level Asian language subjects have been cut in 2021 as universities cope with the ongoing economic impact of the Covid pandemic.

This week La Trobe University in Victoria confirmed it would stop accepting new enrolments in Indonesian at the end of 2021 – with only existing students able to complete the rest of their studies.

Murdoch University in Western Australia had announced plans to stop offering Indonesian, which has been taught since the 1970s, but later postponed this decision.

The president of the Asian Studies Association of Australia, Kate McGregor, said these cuts were creating a “crisis” that would disadvantage Australian students and businesses in the future.

Prof Tim Lindsey, an expert in Indonesian law from the University of Melbourne, said there were now fewer people studying Indonesian in Australia than 50 years ago.Advertisementhttps://20f14b43347ed49ace6ebc3af3eb09e9.safeframe.googlesyndication.com/safeframe/1-0-38/html/container.html

Indonesia was on track to become the fifth-largest economy in the world, he said, and the lack of language knowledge meant Australian businesses and students “are in danger of de-skilling ourselves”.

McGregor also said the decision of the technology-focused Swinburne to discontinue Chinese and Japanese was especially damaging given they were “the languages of two of the world’s leading scientific and technological innovators”. Both courses, she said, also had “healthy enrolment numbers”.

Lindsey said Australia was giving away its own “competitive advantage” on the world stage by having insufficient language skills.

“It is not just slowly declining, it is a spectacular collapse from where it was 50 years ago,” he said. “In the 1970s there were more Australian kids, in absolute numbers studying Indonesian in year 12 than there are now. And that is when the population was a third smaller, or more.

“This is a really big problem, because this is the Asia century, as we are repeatedly told. This is a major strategic blunder …If you wish to engage closely with Indonesia and for example conduct business there – there is a need to have language skills.

“Indonesia has 271 million people, is the world’s third-largest democracy after America and India. And it has got an economy that, pre-Covid, was consistently growing around 5%, and is slated to be in the top five economies in the world by 2050.

“If we are a country that is deskilled linguistically, our interactions with Asia are always going to be mediated through interpreters, often provided by the host country or other countries. That is not in our national interests.”

A spokesperson for La Trobe University said: “Market demand and student enrolments in Indonesian have been consistently very low for several years.”

The university said other universities in Victoria still offered Indonesian, and it allowed its students to enrol in those courses through cross-institutional enrolment.

This year a spokesperson for Swinburne University said it had cut its language units to “focus on our strengths in STEM and technology as we emerge from the challenges presented by Covid-19”.

“This decision does not indicate a lack of respect for studying languages, however, we believe other institutions are better placed to support these study areas.”

McGregor, who is also an associate professor at the University of Melbourne, said it had been known since the 80s and 90s that Asian language skills would be important, but Australia had gone backwards due to a lack of government support and funding.

She said the number of universities offering Indonesian in 2022 had halved since “a generation” ago.

Lindsey said the government should subsidise Asian language programs at schools and universities to reverse the trend.

“The evidence is very clear that where governments subsidise and support the teaching of Asian languages, student numbers will increase. And equally without those subsidies they will decline.

McGregor acknowledged that these course cuts “occur in the context of acute financial pressures”.

“I don’t think it has been an easy decision for the university,” she said. “They were looking for solutions.

“This keeps going back to the question of how do we get stronger demand? The government and wider society has to recognise the importance of Asian languages …Most recently the designation of Asian languages as strategic languages was removed from university funding agreements, weakening the case for government protection of these programs from closure.

“Universities always engage in horse trading, borrowing from one school to pay for another,” she said. “So if universities really believed in this, they could do it. There are many issues at play here.

McGregor also pointed out that a lack of university-educated Indonesian speakers would create a shortage of Indonesian teachers for primary and secondary schools.