Design with discards: process as product

Design with discards: process as product

Unseen, unbuilt iterations of projects should be made visible as a valuable part of architectural agency, not hidden as wasteful mistakes

The pages of architectural journals and websites are replete with beautiful images of buildings for us to admire in their pristine and tentatively inhabited glory. They paint a perfect picture of architecture as it is sent out into the world for us to celebrate, a media meritocracy that forms the basis on which we judge the quality of a practice’s work. But these projects are merely the lucky few to have successfully negotiated the full gauntlet of the construction process from concept to completion, and beneath this seemingly simple veneer is a vast repository of frustrated efforts. If we were to look beyond the rarefied and perfectly composed image of these lauded projects, to instead explore the working processes that underpin their design practice, we would find a murky myriad of loose and dead ends – of site strategies unpursued, material samples unused, entire schemes discarded.

A huge creative value lies in the projects (or those parts of projects) that you won’t see out there in the real world, and it’s a value that comes about from an enormous investment of labour, skill, resources and emotion. As a profession, however, architects lack the feedback mechanisms through which to contemplate these potentially more interesting and unusual facets of practice that haven’t made it to completion. The bravest and most ingenious design approaches often reside in the ash heap of history.

Huawei’s campus in Dongguan, 2019, was built as a collection of replicas of European landmarks, trying on versions of architectural history as prosthetic cladding

Famously, of course, there are whole projects known to have hit the cutting-room floor – among them, Zaha Hadid’s Peak Leisure Club in Hong Kong, Ahrends Burton and Koralek’s Sainsbury Wing extension to the National Gallery in London, Mies van der Rohe’s Mansion House Square and, more recently, Moreau Kusunoki’s Helsinki Guggenheim. But these are celebrated, superstar projects, whose very non-existence stokes the mythology of their otherwise wild success and eclipses the enormous number of hours’ work that was ploughed into their competitors’ schemes too, often at critical emotional and financial cost. At the other end of the spectrum – and far less acknowledged, let alone celebrated – are the almost daily agonies of jettisoning design elements of all scales, the quotidian discard of tectonic details, sketches, models and project imagery, which defines the design process for any architect. These endless cycles of trial and error, aborted projects and futile design iterations form an inherent part of the creative process.

Yet the construction industry is systematically aiming to maximise efficiency, paring back to the merely essential – whether in terms of the consumption of materials or space, or in the labour or sequencing of different contributing trades. The lack of conceptual value given to the necessary experiments and forays undertaken as part of the design process relates to their lack of financial value in remuneration, since the industry, our clients and project managers have a tendency to focus on the value of built output, rather than the labour less visibly required to get there. An architect’s hourly rate is tied to this tyranny of efficient and successful productivity, and so when seemingly wasteful design deviations inevitably arise, it can often feel catastrophic to the project programme, rather than necessary to achieving creative success. A ceaseless push for efficient productivity squeezes out space for creative exploration, and excludes the possibility of accounting for experiments and dead ends without eliciting financial peril. The increased usage of AI and BIM in architectural design may help to increase the efficiency of production, reducing the hours required to create construction packages. It can also make both the process and output feel like an assembly of a kit of parts, wrapped in a slightly more articulated skin. Conformity and reliability is a surefire route to efficient project production – and it’s the least interesting.

A few large practices are still able to spend vast amounts of time and resources on testing and experimentation, storing their production into pristine archives, such as Herzog & de Meuron’s ‘cabinet of models’, one arm of the architects’ Kabinett, established in 2015

Clients might at first be charmed by the ceaseless creativity of experiments, prototypes and alternatives produced along the way, but they don’t necessarily want to have to foot the bill for them. Perhaps for this reason, published design processes are at best post-rationalised and at worst completely obscured – the myth of the napkin sketch reinforcing the idea that projects leap fully formed and unblemished into the mind of the architectural genius. By wilfully avoiding acknowledgement of this intrinsic uncertainty, we are riddling our clients (and our students) with anxiety and the misperception that all architectural projects must emerge ‘perfect’. By focusing our attention on the successfully constructed outcomes rather than the waste-riddled process of design, we are also missing the inspiration that these outliers and experiments might provoke.

Civic employment was often thought to be a path undertaken by ‘the unambitious and the not very talented’, but in the aftermath of the Second World War, employment in the Architects’ Department of the London County Council (LCC) provided a rare opportunity that acknowledged a sense of indeterminacy, giving time, security of employment, support and resources for developing experiments and explorations. Since the Council acted, in effect, as both client and practitioner, the architects were provided with steady employment and a ceaseless roster of projects, which freed them from commercial pressures of winning and publicising work – a shift in the value system from what we experience today. The LCC’s position outside the commercial imperatives of profit and efficiency – being ‘unconcerned with speed and making money quickly’ – meant that the department’s architects were afforded the luxury of time, creating an atmosphere that Thamesmead architect Philip Bottomley recalled as ‘very easy’ and ‘unhurried’. 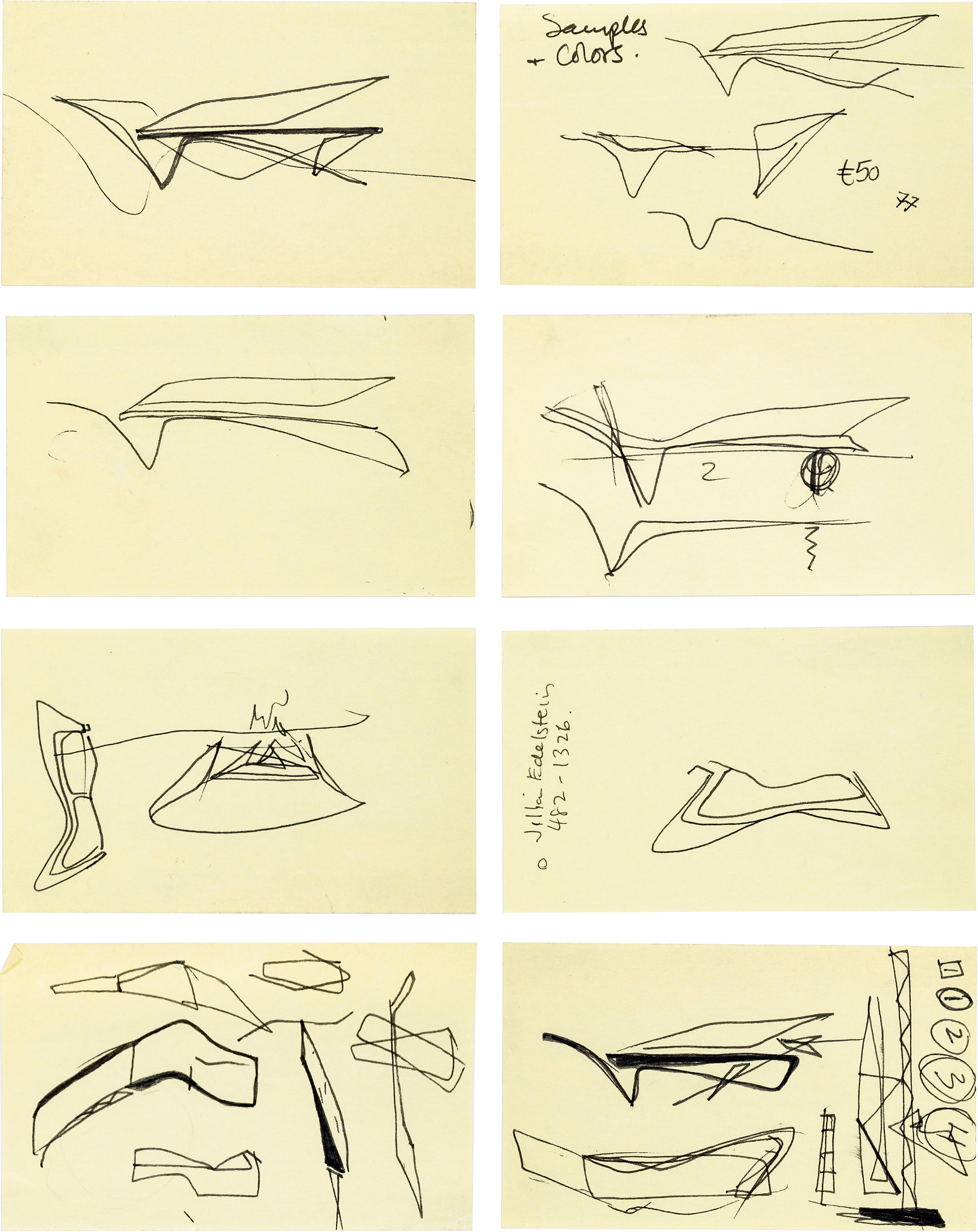 A famously prolific hasty sketcher, Zaha Hadid put her thoughts on to Post-it Notes for the unrealised Azabu-Juban building, Tokyo, 1986

Credit:courtesy of Drawing Matter Collections / the estate of the architect

It was instead possible – and explicitly encouraged – to give thoughtful consideration to the task in hand, and to develop radical new design approaches, as seen at LCC’s Elliott Comprehensive School in Putney in 1957 or the Alton Estate in Roehampton in 1958. Effectively a sandpit for ingenuity, architects in small teams were provided with the resources to experiment with materials, typologies and spatial strategies. It provided the ability to reflect on the work as built, discussing design with users and sharing insight with colleagues, to feed this knowledge back into the design process. But who can afford such luxury of unproductively wasteful creative activity today – both metaphorically and literally? It’s rare that a practice is able to ease the grip of efficiency without financial lubrication. Yet the demonstrable creative success of this alternative manner of working brings into question our current agency as a profession, and whether there may be alternative approaches to resourcing and practice that could be employed to leverage more wiggle room for design exploration.

We accept that the procurement process is based upon an avoidance of risks, even though creativity is rooted in the necessity of taking them. Somehow, we need to find the space to explore areas of uncertainty and inefficiency if we are to infuse architecture with the eccentricity, character and ingenuity it so desperately deserves, rather than allowing this to be squeezed out. In place of the expectation to become evermore efficient and reliable architectural producers, could we instead collaboratively revel in the indeterminant fallibility of the dead ends and experiments that we inevitably shed along the way? This is not just to accept it as a necessary and wasteful part of the architectural process, but also as one that forms a fertile territory for architectural inspiration. We could then begin to define a new territory for practice: one that enables more diverse, innovative and inclusive practices to emerge.

POSTSCRIPT: in writing this article, I deleted at least six times as many words as you see here, casting off references and trimming deviations to other potential arguments. Now you have read the finished article, how can you tell what you’re missing out on that isn’t included? And what might later grow from these fragments left behind?