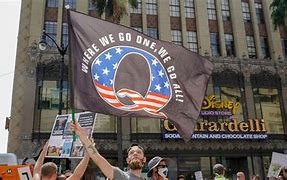 CNN)Michael Flynn, former President Donald Trump’s first national security adviser, appeared to endorse a Myanmar-style coup in the United States on Sunday.For months, QAnon and Trump-supporting online forums have celebrated the deadly military coup in Myanmar and suggested the same should happen in the United States so Trump could be reinstated as President.Flynn made the comments at an event in Dallas on Sunday that was attended by prominent peddlers of the QAnon conspiracy theory and the Big Lie.

“I want to know why what happened in Minamar (sic)can’t happen here?” a member of the audience, who identified himself as a Marine, asked Flynn.”No reason, I mean, it should happen here. No reason. That’s right,” Flynn responded. CNN has reached out to Sidney Powell, a lawyer who has represented Flynn in the past, for comment.Some QAnon followers are obsessed with the idea that the US military will somehow put Trump back into office. Some believed and hoped Trump would declare martial law on Inauguration Day to stop Joe Biden from entering the White House.

Speaking at the same event in Dallas, Flynn earlier in the weekend falsely claimed “Trump won. He won the popular vote, and he won the Electoral College vote.”Flynn is seen as a hero in the QAnon movement. Last summer, Flynn posted a video featuring QAnon slogans. In a recent interview, Flynn attempted to distinguish between the QAnon movement, which is known for outlandish conspiracy theories, and its followers, saying: “What I tell people to do is look at the people that are involved. Look at the values that they espouse and let’s move along.”

The Dallas event, titled “For God & and Country Patriot Roundup,” had been planned for months. Concerns about the event contributed to the Health and Human Services Department’s decision to transferring unaccompanied migrant children from a nearby location in the city, CNN reported earlier this month.Powell, who has frequently pushed the falsehood that Trump was reelected, also appeared at the event and said Trump should be “simply reinstated” and that a “new inauguration day is set.”Talk among Trump supporters of a coup not only happens online, CNN spoke to followers of the former President in Ventura, California, in February who said they wanted to see a Myanmar-style coup happen here.At an Oval Office meeting during the closing weeks of Trump’s presidency, Flynn suggested that Trump could invoke martial law as part of his efforts to overturn the election, CNN has reported. It wasn’t clear whether Trump endorsed the idea, but others in the room forcefully pushed back and shot it down.