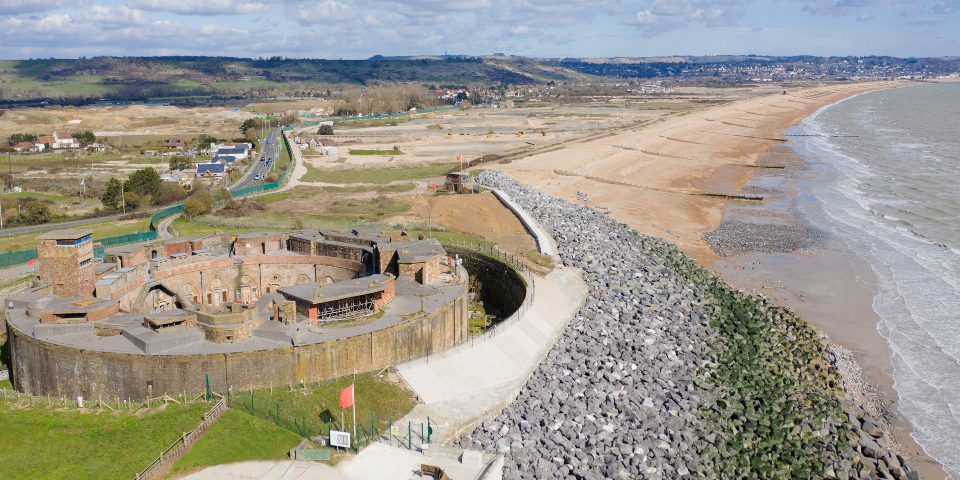 Low carbon concrete will be central to the Environment Agency’s efforts to become carbon net zero by 2030 as the organisation sets out its roadmap to reduce emissions by 45%.

As part of the strategy, the agency has said that will use low carbon concrete as the default option for constructing flood defences and other critical infrastructure, providing it meets performance specifications. This commitment is seen as a key element within the roadmap as the Environment Agency revealed that more than half of its current carbon emissions comes from the construction of flood defences.

Low carbon concrete has already been used in some flood defences, including the recently opened Hythe Ranges sea defences (pictured) which cut more than 1,600t of emissions from the project’s carbon footprint.

While the use of low carbon concrete is expected to reduce some of those emissions, the agency has also committed to “an increasing focus on nature-based solutions that don’t require hard defences built from carbon-intensive concrete”.

Other solutions put forward on the net zero roadmap include using energy-efficient pumps to help move water away from homes during floods, switching to only electric cars by 2023, and reducing the overall number of vehicles.

Flexible working arrangements brought in as a result of the pandemic have already reduced the Environment Agency’s emissions from business travel by 48% and emissions from buildings by 22%, against the previous financial year. The agency has said that it will continue to support homeworking as restrictions lift in order to maintain these reductions.

Nonetheless, the Environment Agency has said that carbon offsetting will still be required in order to get to net zero and it is working on a strategy to delivery this and is expected to be published in April next year.

Environment Agency chief executive Sir James Bevan said: “Reaching net zero will be one of the biggest challenges the Environment Agency has ever faced. It will require every single one of us to play our part, and to think and act differently.

“We will integrate net zero into every aspect of our work over the coming decade. By learning, sharing best practice and partnering with our suppliers, businesses and communities across the country, we will do everything we can to play our part in becoming a net zero nation and tackling the climate emergency that we all face.”

According to Environment Agency chair Emma Howard Boyd, the roadmap sets out credible short-term and long-term action to bring down emissions.