Violence is endemic in north central Nigeria: what communities are doing to cope

Taliban control Tajikistan border crossing as Ghani heads to US 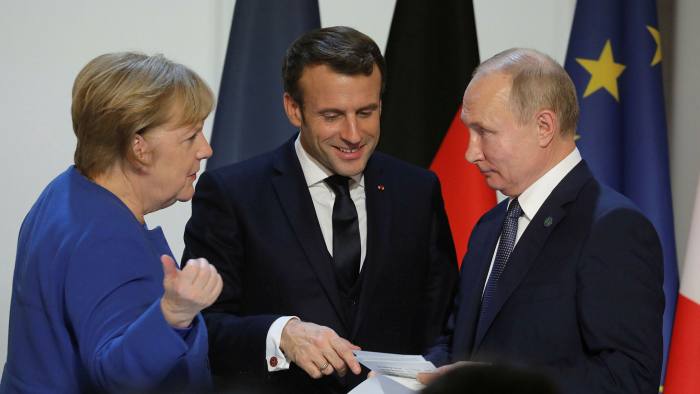 Please use the sharing tools found via the share button at the top or side of articles. Copying articles to share with others is a breach of FT.comT&Cs and Copyright Policy. Email [email protected] to buy additional rights. Subscribers may share up to 10 or 20 articles per month using the gift article service. More information can be found here.
https://www.ft.com/content/03528026-8fa1-4910-ab26-41cd26404439

Germany and France have called for a new EU strategy of closer engagement with Russia to build on discussions with Moscow in the wake of US president Joe Biden’s Geneva summit with Vladimir Putin.  Diplomats said Angela Merkel, the German chancellor, wants the EU to consider inviting the Russian president to a summit with EU leaders, and that the initiative was supported by French president Emmanuel Macron. Ambassadors representing Berlin and Paris wrongfooted other EU capitals at a meeting in Brussels on Wednesday by making the new proposals on the relationship with the Kremlin, according to people with knowledge of the discussions. However, Merkel has been in close consultation with European allies in the past few days, with Macron and Draghi both visiting Berlin for talks. US secretary of state Antony Blinken has also been in Berlin for talks with the government this week. Germany is of the view that the Biden-Putin summit provides a template for reviving relations with Russia. Merkel meets with Putin regularly but advocates finding a format that allows the EU to speak with one voice on Russia.

EU summits with Putin have been suspended since Russia annexed Crimea in 2014. The proposed new outreach to Moscow is likely to alarm some EU member countries, such as the Baltic states and Poland, which neighbour Russia and want to take a tougher line with the Kremlin. The Franco-German initiative came shortly after Moscow said it had fired warning shots including bombs at a British warship in the Black Sea near Crimea. The UK denied that any shots had been fired and said it believed the “Russians were undertaking a gunnery exercise”. EU leaders touched on the future of Russia relations at their May summit and tasked the European Commission to come up with proposals on how to proceed. But the Franco-German draft text is far more conciliatory than last week’s commission analysis which warned of a “negative spiral” in EU-Russian relations and the need to counter “malign actions”. The wording proposed to fellow member states, which if adopted would form part of summit conclusions later this week, reiterated the EU’s willingness for “a selective engagement” with Russia on areas of common interest.

It encourages the European Commission and the EU’s diplomatic service to develop “concrete proposals and leverages” to this end. Topics would include climate, the environment, the Arctic, cross-border co-operation, health, space, the fight against terrorism and foreign policy areas including Syria and Iran.  “In this regard, the European Council calls for a review of the existing format of dialogue with Russia, including meetings at leaders’ level,” the proposed draft says.  The proposal comes a day after Merkel spoke with Putin in a telephone call to mark 80 years since the Nazi invasion of the Soviet Union. During that call, according to the Kremlin, “it was pointed out that overcoming mutual hostility and achieving reconciliation between the Russian and German people was of crucial significance for the postwar future of Europe, and that ensuring security on our common continent now is only possible through joint efforts”. “The parties agreed on further personal contacts,” the Kremlin added.

One senior EU diplomat said the Franco-German initiative had caused a “stink” among fellow EU countries, who voiced their frustration at the last minute intervention on the eve of the summit. “This is not a way things should be handled,” said the diplomat.  Another member state official described the intervention as “not very helpful” and a third said they were “still analysing” the surprise move. An EU official said the bloc would “reflect” on how to find a way forward ahead of the summit which begins on Thursday afternoon. Additional reporting by Guy Chazan in Berlin and Victor Mallet in Paris Get alerts on EU foreign policy when a new story is published Get alerts Copyright The Financial Times Limited 2021. All rights reserved.