‘I came here to fight’: Rare footage of Ethiopia’s Tigray 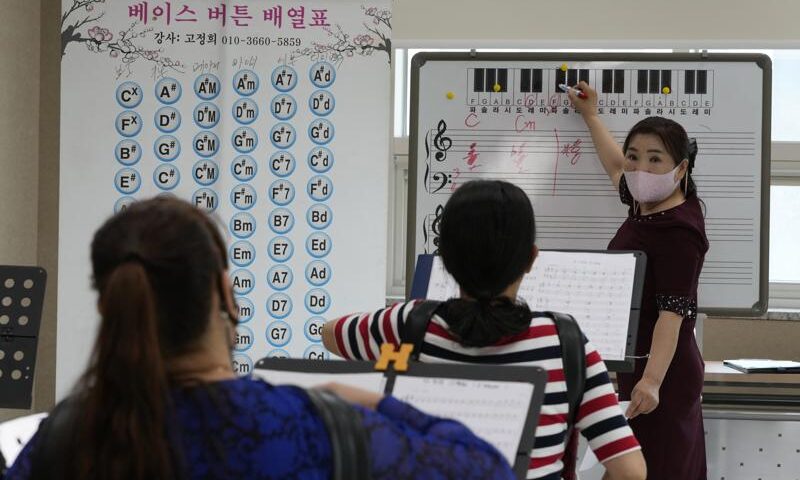 By HYUNG-JIN KIMan hour ago

1 of 8Ko Jeong Hee, right, a defector who teaches accordion, gives a lecture during the accordion class at the Inter-Korean Cultural Integration Center in Seoul, South Korea, on June 10, 2021. The center, which opened last year, is South Korea’s first government-run facility to bring together North Korean defectors and local residents to get to know each other through cultural activities and fun. It’s meant to support defectors’ often difficult resettlement in the South, but also aims at studying the possible blending of the rivals’ cultures should they unify. (AP Photo/Ahn Young-joon)

SEOUL, South Korea (AP) — A small group of North Korean defectors gather at a sleek seven-story building in Seoul. Together with South Korean residents, they play the accordion, make ornaments and learn how to grow plants. Later, some go out for coffee.

“South and North Koreans gather here, smile and talk to each other. They ask each other about their pasts. Some (South Koreans) say their parents also originally came from North Korea,” said Ko Jeong Hee, 60, a defector who teaches accordion at the Inter-Korean Cultural Integration Center. “The atmosphere is really good here.”

The center, which opened last year, is South Korea’s first government-run facility to bring together North Korean defectors and local residents to get to know each other through cultural activities and fun. It’s meant to support defectors’ often difficult resettlement in the South, but also aims at studying the possible blending of the rivals’ cultures should they unify.ADVERTISEMENT

Unification is a cherished part of the political rhetoric of both Koreas, but the difficulties of creating a single Korea comprised of the fantastically rich and successful South and the poor, authoritarian North make the reality of such a plan deeply complicated.

A Korean unification in the near future seems highly unlikely. The North, despite decades of poverty and mistrust of the outside world, is not politically unstable, and there have been no meaningful recent talks on unification between the Koreas.

Exchange programs between the Koreas — singers, art troupes and basketball matches — are frozen in the midst of a dispute over North Korea’s continued accumulation of nuclear weapons. There are also questions over just how useful the center will be, and whether many defectors, suffering economic hardship, will join in events that offer no chance of profit.

About 34,000 North Koreans have resettled in South Korea after fleeing poverty and political oppression at home, mostly in the last 20 years or so. That’s about 0.06% of South Korea’s 52 million people. Upon their arrival in South Korea, defectors are given citizenship, apartments, resettlement money, three months of social orientation courses and other benefits.

But they come from an extremely repressive, nominally socialist country whose estimated nominal gross domestic product was only one-54th of South Korea’s in 2019. Many are often discriminated against in the South and struggle to adjust to their new brutally competitive, capitalistic lives.

Last year, official data showed defectors’ monthly average wage was about 80% of South Koreans’. They stuck with a job for 31.6 months on average, less than half the time spent by South Koreans; and their school dropout rate was nearly three times higher. A 2019 survey showed only 9.4% of South Korean respondents would accept defectors marrying into their families.ADVERTISEMENT

The plight of defectors in the South raises questions about what would happen if South Korea had to handle a sudden influx of North Korea’s 26 million people in the event of a unification on South Korean terms.

“This country has been unable to embrace those who voluntarily flee North Korea, but many are shouting for an integration of South and North Koreans and a unification,” said defector Son Jung Hoon, who worked as a human rights activist in South Korea for years. “That’s hypocrisy.”

Even the center’s establishment has been contentious. Its opening was delayed for several years because of protests by local residents, who worried it would tarnish their neighborhood’s image and lower housing prices. Center officials say there are no such complaints any longer.

Churches and civic groups have previously offered activities involving defectors, often enticing them with cash. They included a chorus, camping trips and soccer games with South Korea-born residents. But Kang Woo-jun, a university profession who is in charge some programs at the government center, said that facility doesn’t offer money but is pushing to give defectors high-quality classes.

“Cultural integration is much more difficult and requires a longer time than a political and institutional unification,” Unification Minister Lee In-young said recently. “Even though South and North Korea, living separated for about 70 years, becoming one is a long, treacherous journey, we must not stop it. It’s a journey that we have to go on together. That’s the reason why the Inter-Korean Cultural Integration Center exists.”

Built in a quiet residential neighborhood in western Seoul, the center isn’t well-known to the general public. COVID 19-related restrictions have largely forced it to offer more than half of its programs online and limit the number of in-person participants to less than 10. On Monday, its in-person programs were suspended or switched online amid a viral resurgence in Seoul.

During a recent visit to the center by Associated Press journalists, four female defectors and a South Korean man, all wearing masks, played the accordion, with Ko, the instructor, helping them.

Yu Hwa-suk, 57, fled to the South in 2015, and said she wants to achieve her childhood dream of becoming an accordionist.

“(South Korean) participants have a huge interest in North Koreans so we felt an intimacy with them,” Yu said, adding that she and others often dine out after their class.

In a craft class, four defectors and three South Koreans, all women, appeared a bit uncomfortable with each other, saying they haven’t had any meaningful conversations.

Song Hyo Eun, a 39-year-old South Korean, said she wouldn’t ask defectors about their lives in North Korea because it might involve a sore subject like their relatives left behind. Two defectors in their 70s said they worry South Koreans might have negative views about defectors.

Authorities should use various local facilities to integrate defectors living around South Korea, rather than establishing one big center in a certain area, said Kim Whasoon, who works at a research institute at Seoul’s Sungkonghoe University.

Many defectors eke out a living and have been paid for attending cultural events in the past, said Kim Jong Kun, a professor at Seoul’s Kunkuk University. Because of this, Kim said, “I don’t think they want to gather with South Koreans just to learn calligraphy and musical instruments or sing a song.”

Park Seong Hee, 50, a South Korean instructor in the craft class, said she hopes for a gradual process. “If we are unified, I think North Koreans would all come down to South Korea and disrupt the order that we’ve established,” she said.

Yu, the defector, wept as she spoke of unification as a way to rejoin her relatives and teach them what she’s learned in South Korea.

“Frankly speaking, I sometimes want to go back home,” Yu said. “When I lived in North Korea, I thought I would be happy if I was well-off. But after coming here, I’ve realized that being happy means being with the people I miss.”