In Tigray, food is often a weapon of war as famine looms 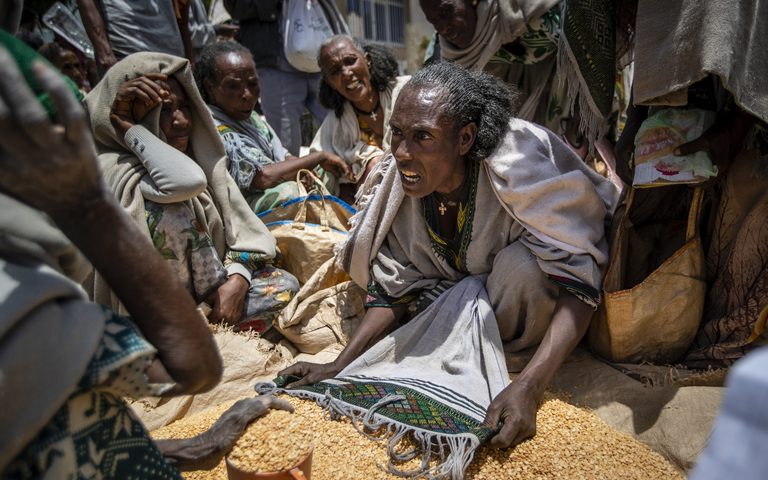 ABI ADI, Ethiopia (AP) — First the Eritrean soldiers stole the pregnant woman’s food as she hid in the bush. Then they turned her away from a checkpoint when she was on the verge of labor.

So she had the baby at home and walked 12 days to get the famished child to a clinic in the northern Ethiopian region of Tigray. At 20 days old, baby Tigsti still had shriveled legs and a lifeless gaze — signs of what the United Nations’ top humanitarian official calls the world’s worst famine conditions in a decade.

“She survived because I held her close to my womb and kept hiding during the exhausting journey,” said Abeba Gebru, 37, a quiet woman from Getskimilesley with an amulet usually worn for luck around her left wrist.

Here, in war-torn Tigray, more than 350,000 people already face famine, according to the U.N. and other humanitarian groups. It is not just that people are starving; it is that many are being starved, The Associated Press found. In farming areas in Tigray to which the AP got rare access, farmers, aid workers and local officials confirmed that food had been turned into a weapon of war.

This story was funded by a grant from the Pulitzer Center on Crisis Reporting.

Ethiopian and Eritrean soldiers are blocking food aid and even stealing it, they said, and an AP team saw convoys with food and medical aid turned back by Ethiopian military officials as fighting resumed in the town of Hawzen. The soldiers also are accused of stopping farmers from harvesting or plowing, stealing the seeds for planting, killing livestock and looting farm equipment.

More than 2 million of Tigray’s 6 million people have already fled, unable to harvest their crops. And those who stayed often cannot plant new crops or till the land because they fear for their lives.

“If things don’t change soon, mass starvation is inevitable,” said a humanitarian worker in the region, who spoke on the condition of anonymity to escape retaliation from armed groups. “This is a man-made disaster.”

The full extent of the hunger is hard to pin down because officials — and food aid — still cannot get into the remotest parts of a region known for its rugged inaccessibility even in the best of times. The U.N. World Food Program on Thursday said it had gotten aid to 1.4 million people in Tigray, “barely half of the number we should be reaching,” in part because armed groups were blocking the way.

For every mother like Abeba who makes it out, hundreds, possibly thousands, are trapped behind the front lines or military roadblocks in rural areas.

“Most of the malnourished children, they die there,” said Dr. Kibrom Gebreselassie, chief medical director of Ayder Hospital in Mekele. “This is a tip of the iceberg.”

The grinding war in Tigray started in early November, shortly before the harvest season, as an attempt by Ethiopian Prime Minister Abiy Ahmed to disarm the region’s rebellious leaders.

On one side are guerrillas loyal to the ousted and now-fugitive leaders of Tigray. On the other are Ethiopian government troops, allied troops from neighboring Eritrea and militias from the Amhara ethnic group. Trapped in the middle are the civilians of Tigray.

The war has spawned massacres, gang rapes and the widespread expulsion of people from their homes, and the United States has declared “ethnic cleansing” in western Tigray. Now, on top of those atrocities, Tigrayans face another urgent problem: hunger and starvation.

The deputy CEO of the region, Abebe Gebrehiwot, echoed the assessment of “ethnic cleansing” and said combatants are blocking food aid from reaching those who need it. He said the region’s interim administration, appointed by Abiy, is desperately trying to forestall a famine, including in the areas where Eritrean forces remain in charge.

Ethiopia’s government strongly disputes that starvation is being used as a weapon of war. Mitiku Kassa, an official with the National Disaster Risk Management Commission, said Wednesday that the U.N. and nonprofit groups have “unfettered access” to Tigray, and that food aid worth about $135 million has been distributed.

“We don’t have any food shortage,” he declared.

That’s not what the AP found out on the ground.

Teklemariam Gebremichael and his neighbors said he and his neighbors were no longer allowed to farm. When Eritrean soldiers came upon him looking after his cattle and harvesting crops, they shot both him and his cows, he said.

He survived. The cows didn’t. With food in short supply, his wound is slow to heal.

“I call on the world has to take immediate action to help Tigray, because we can’t live on our own land anymore,” he pleaded.

Another farmer, Gebremariam Hadush, and his five children said they were taking their chances anyway, racing against time as the wet season approached.

“We should be tilling this land for the second or third time,” he said. “But we couldn’t till at all until now because we haven’t had peace. So now all we can do is just scrape the surface.”

Hunger is particularly sensitive for Ethiopia, where images of starving children with wasting limbs and glassy eyes in the 1980s led to a global outcry. Drought, conflict and government denial all played a part in that famine, which killed an estimated 1 million people.

The situation now is also drawing concern from the world — although not enough of it, Linda Thomas-Greenfield, U.S. ambassador to the U.N., said Thursday. She called for the U.N. Security Council to hold a meeting on Tigray.

“Famine may already be happening in certain areas. … It’s unconscionable especially in the very place that woke the world up to the scourge of hunger,” she said. “I ask those who refuse to address this issue publicly, do African lives not matter?”

In Hawzen, where artillery shelling sporadically sends people running for the hills, teacher Gebremichael Welay said he still has memories of the bombing raids that destroyed food silos when he was a little boy.

“(The Ethiopian military) bombed us,” he said. “They are doing it again.”

Farming has not stopped entirely in Tigray, but it has become a dangerous act of resistance. On the road to Abi Adi, a town about 100 kilometers west of Mekele, the AP saw a few farmers out plowing or taking their cattle to pasture in the distant hills. Craters from recent fighting were visible, and bombed military trucks languished by the roadside.

“If they (Eritrean soldiers) see us plowing, they beat us,” said 20-year-old farmer from Melbe, southwest of Mekele, who gave only his first name of Kibrom. “We only plow when we are sure they are not around.”

Besides preventing plowing, the soldiers took other measures to destroy food, witnesses said. Eritrean soldiers are known to contaminate food silos, sometimes mixing grain with sand and soil, according to an official with an aid group based in Mekele. And the looting by both Ethiopian and Eritrean soldiers included farm equipment, farmers said.

“All our farm tools, including plows, were looted and taken away on trucks,” said Birhanu Tsegay, 24-year-old farmer from Neksege town. “They left nothing there.”

An AP team saw a honey processing plant in the town of Agula stripped bare, allegedly by Eritrean soldiers. Aid worker Tekeste Gebrekidan picked up a soiled flyer of the farmers’ union that once exported the region’s prized honey and noted ruefully that its leaders are missing, presumed dead or displaced.

“Demand for food in the villages is very high,” said Tekeste, who serves as the coordinator of the Relief Society of Tigray in the Tsirae Womberta district. The level of need, he said, is “beyond our capacity.”

Sometimes food aid makes it through despite all the challenges, but it still falls short. Early in May a large crowd gathered under a scorching sun in Agula to share food bought with U.S. money.

The food they gave out that afternoon — 15 kilograms of wheat, half a kilogram of peas and some cooking oil per person, to last a month — was earmarked only for the most vulnerable. That included pregnant mothers and elderly people such as 60-year-old Letebrhan Belay, who walked for four hours to get there.

Her family had 10 members, she said. She had received food for only five. But she insisted that she was still faring better than others.

“There will be people dying of hunger,” she said, feeling the little sack that held her meager rations.

Some of the more fortunate, like nursing mother Abeba, make it past the many roadblocks to reach medical help in Abi Adi and Mekele, but they are few. Four women and their babies were admitted in the makeshift ward for malnourished babies in Abi Adi when the AP was there.

At least two children brought to the center since February did not live, said Birhanu Gebremedhin, health coordinator for the district of Abi Adi. He said many malnourished children in the villages could not make it out.

“This malnutrition is caused by the conflict,” Birhanu said. “They’ve stolen their food, their equipment, and some were killed by the troops even. So they are not able to feed their children.”

Birhan Etsana, a 27-year-old mother from Dengelat, was still hanging onto the lone survivor of her triplets, a baby admitted with complications stemming from severe acute malnutrition, including heart failure. The baby, Mebrhit, was 17 months old but weighed just 5.2 kilograms (11lbs 7oz). And that’s after a week in intensive care, where she squeaked out of danger with a tube carrying formula through her nostrils.

“Even when we were in the field and I gave her the breast, she couldn’t drink anything,” Birhan said. “It’s because of lack of food.”

Another baby admitted to Ayder Hospital with severe acute malnutrition died, said head nurse Tkleab Gebremariam. The mother fled during fighting, leaving the child with his helpless grandmother for seven days. They were reunited after 10 days, but they got to the hospital too late.

As he spoke, Tkleab gingerly felt the bed sores on the scalp of one who had beaten the odds, Amanuel Mulu.

Mulu’s mother had spent too much time hiding from soldiers and scavenging for food to look after her child. As the soldiers got closer, she had to escape into the bush. Her baby suffered.

The child was unconscious when he was first admitted in April, severely malnourished and anemic after losing half his body weight. Two weeks in intensive care saved his life. At almost two years old, he still weighed only 6.7kg (14lbs 12oz).

“This baby is very lucky to get well after coming here,” Tkleab said. “There are many who didn’t get this opportunity.”