‘Infilling historic bridges is so unnecessary’: An alternative solution for Highways England

Tunnelling was always a ‘very questionable’ option for A417 missing link

A 159-year-old masonry arched bridge perched idyllically in the heart of the Cumbrian countryside has gone from relative obscurity to the centre of a nationwide scandal in a matter of days.

Images of the Great Musgrave bridge before and after Highways England’s contractors poured 1,000t of concrete beneath its historic arches paint a sorry picture.

Highways England is now facing a nationwide backlash after those images were splashed on the pages of The Daily Mail and The Times, broadcast on ITV and shared widely on social media.

The structure is part of the Historical Railways Estate managed by Highways England on behalf of the DfT and comprises 3,800 bridges, tunnels and viaducts, including 77 listed structures.

Jacobs acts as the ‘sole provider’ (designer) for the Historical Railways Estate and has just been reappointed for another seven years. Six contractors will support Jacobs in carrying out any work, including Dyer & Butler and Balfour Beatty.

According to The HRE Group – an alliance of engineers, sustainable transport advocates and greenway developers – the bridge is one of 115 disused railway structures programmed for infilling by Highways England, with 15 others due for demolition.

Highways England contests this number and instead states that its five-year plan only includes nine bridge demolitions, the removal of six redundant abutments and 69 full or partial infills.

Highways England said infilling of the Great Musgrave bridge was needed to “prevent further deterioration of the bridge from occurring and remove the associated risk of structural collapse and harm to the public”.

However, the HRE Group and two local railway groups (the Eden Valley railway and Stainmore railways) claim that there were no real concerns about the bridge’s condition.

They add that while infilling the bridge cost £124,000, a £5,000 repair job would have made it safe for all vehicles to pass over. And bridge restoration experts agree.

“The shock of seeing the images of one our historic masonry arched bridges in Cumbria ‘concreted in’ was intense. What is going on?” Kitching said.

“This is the last method that should ever have been considered for a number of reasons:

Kitching added: “There are many other ways of restoring bridges like this in a more sensitive way than infilling.”

Kitching added that Goldhawk Bridge Restoration Ltd has been “saving, strengthening and preserving heritage masonry arched structures all over the UK” for the past 20 years.

The company’s Masonry Arch Repair and Strengthening (MARS) system has been rolled out on more than 300 railway and highway bridges across the country – many much larger than the Great Musgrove structure. 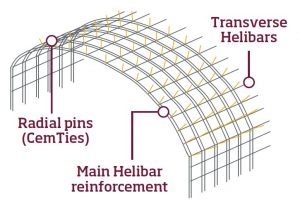 The solution involves the installation of a reinforcement system which consists of stainless steel bars, installed into raked slot in the soffit of the arch (see diagram right).

The grid is connected at intersections with similar radial reinforcement pins which also tie together the multiple rings of the arch. The reinforcement and pins are bonded into place with a highbond strength injectable resin.

The key purpose of reinforcement systems is to increase the overall load carrying capacity of the arch barrel while not reducing the structure clearances or adversely affecting the appearance.

Kitching explains that another key benefit of the system is that it can be installed quickly without needing to close the bridge as all work is carried out from underneath the structure.

Kitching estimates that it would take around six weeks from first inspection to installation on a bridge the size of the Great Musgrove structure. He also estimates it would have cost half as much as infilling and would have had a significantly smaller carbon footprint.

The MARS system was most recently deployed on two Northamptonshire bridges; a nine arch bridge in Oundle and a 13 arch bridge in Thrapston (see gallery above).

But it has also been used on countless single arch bridges in the UK such as the Unsliven Old Bridge in Stockbridge, and the Nant Mafon bridge in Merthyr Tydfil, Wales (See case study below).

Kitching added: “Our group of engineers and technicians have for the past 20 years been saving, strengthening and preserving the heritage masonry arched structures all over the UK so that they can carry modern highway and rail loadings using a highly cost effective, close to carbon zero, conservation acceptable method.

“Was this considered [for the Great Musgrove bridge]? No, yet we are currently carrying out highway bridge strengthening using our conservation acceptable system all over the UK.”

Kitching added that the way the Great Musgrove bridge has been infilled by using spray concrete means that it would be “virtually impossible” to reverse without seriously damaging the bridge in the process.

In response, Highways England Historical Railways Estate director Richard Marshall added: “Most of the 3,200 tunnels, bridges and viaducts we look after were built well over 100 years ago, so they need a lot of maintenance. We will spend £13M this year on keeping the public safe when using these structures or the land around them.

“Infilling is maintenance-free and preserves the small number of bridges where this is required. The infilled bridges remain intact and supported, and the infilling process can be reversed if a future purpose is found for the structure.”