Bulgaria votes again, ready to move on from Borisov era 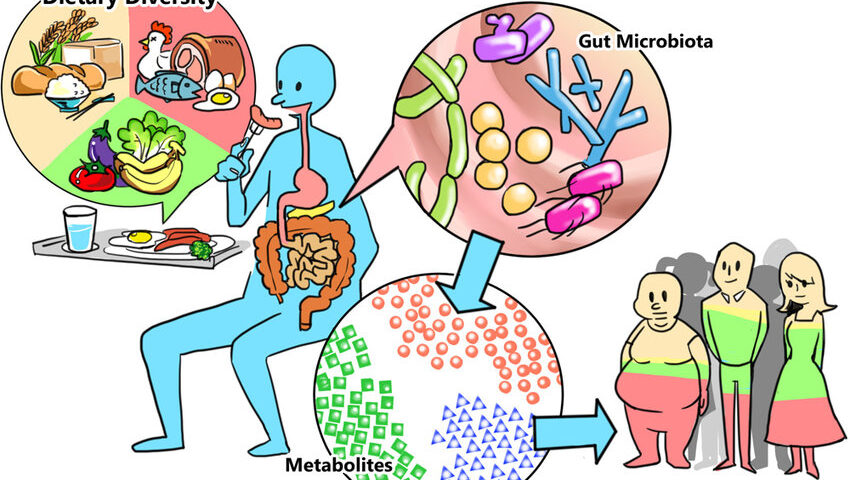 The human gut microbiome encompasses 1014 resident microorganisms, including bacteria, viruses, fungi, and protozoa, that are commensal with the human intestinal tract. Overall the predominant bacterial groups in the microbiome are gram positive Firmicutes and gram negative Bacteroidetes.

Microbes in the distal gut contribute to host health through biosynthesis of vitamins and essential amino acids, as well as generation of important metabolic byproducts from dietary components left undigested by the small intestine. Short chain fatty acid (SCFA) byproducts such as butyrate, propionate, and acetate act as a major energy source for intestinal epithelial cells and may therefore strengthen the mucosal barrier.

An acute change in diet—for instance to one that is strictly animal-based or plant-based—alters microbial composition within just 24h of initiation, with reversion to baseline within 48h of diet discontinuation. Furthermore, the gut microbiome of animals fed a high-fat or high-sugar diet is more prone to circadian rhythm disruption. Studies also suggest that overwhelming systemic stress and inflammation—such as that induced via severe burn injury—can also produce characteristic acute changes in the gut microbiota within just one day of the sustained insult.

The microbiome in disease

Studies examining the composition and role of the intestinal microbiome in different disease states have uncovered associations with inflammatory bowel diseases (IBD), inflammatory skin diseases such as psoriasis and atopic dermatitis, autoimmune arthritis, type 2 diabetes, obesity, and atherosclerosis. For instance, IBD patients tend to have less bacterial diversity as well as lower numbers of Bacteroides and Firmicutes—which together may contribute to reduced concentrations of microbial-derived butyrate.

Butyrate and other SCFAs are thought to have a direct anti-inflammatory effect in the gut. Furthermore, different indices of Crohn’s disease activity have each been characterized by specific gut mucosa-attached bacteria, that in turn are significantly influenced by anti-TNF therapy.

The relative abundance of different bacteria may mediate intestinal inflammation and Crohn’s disease activity through effects on local regulatory T cell populations. Enzymes enriched in IBD microbiomes are more frequently involved in membrane transport, which could support a “leaky gut hypothesis” contributing to the disease state.

Interestingly, autoimmune T17 differentiation from naïve T cells appears to be dependent on the segmented flamentous bacteria. Studies have shown that T17 cells are absent in the small-intestinal lamina propria of germ-free animals, which is the major site of their differentiation.

Furthermore, introduction of segmented flamentous bacteria is sufficient to trigger autoimmune arthritis in these animals through promotion of T17 cell development in the lamina propria and spleen. The gut microbiota of patients with type 2 diabetes has been functionally characterized with diabetes-associated markers, showing enriched membrane transport of sugars and branched-chain amino acids, xenobiotic metabolism, and sulphate reduction along with decreased bacterial chemotaxis, butyrate synthesis and metabolism of cofactors and vitamins.

Obesity has been characterized by an altered intestinal Bacteroides: Firmicutes ratio, with greater relative abundance of Firmicutes. Furthermore, studies involving microbiota transplantation from obese to lean mice have shown that the obese phenotype is transmissible and may be promoted by microbiota that have increased capacity to harvest energy from the host diet.

Risk of atherosclerosis has similarly been linked to the gut microbiota, in particular due to enhanced metabolism of choline and phosphatidylcholine that produces the proatherogenic compound, trimethylamine-N-oxide (TMAO). A recent study also demonstrated that gut bacteria can produce significant amounts of amyloid and lipopolysaccharides, which are key players in the pathogenesis of Alzheimer’s disease. These observations illustrate the important role of microorganisms in human health and suggest that manipulating them may influence disease activity. While the microbiome of a healthy individual is relatively stable, gut microbial dynamics can certainly be influenced by host lifestyle and dietary choices.

Protein, fats, digestible and non-digestible carbohydrates, probiotics, and polyphenols all induce shifts in the microbiome with secondary effects on host immunologic and metabolic markers. For instance, animal protein intake positively correlates with overall microbial diversity, increases abundance of bile-tolerant organisms such as Bacteroides, Alistipes, and Bilophila, and reduces representation of the Roseburia/E. rectale group. A high-saturated fat diet seems to increase counts of total anaerobic microfora and the relative abundance of Bacteroides and Bilophila.

Maintaining a healthy gut microbiome is critical to human health

An increasing body of evidence suggests that our gut microbiome has a profound impact on our health. In the past decade, gut microorganisms have been shown to play a role in a wide range of human diseases, including obesity, psoriasis, autism, and mood disorders.

The close relationship between diet, the gut microbiome, and health suggests that we may possibly improve our health by modulating our diet. One way in which microbiota can infuence host health is by modulating host immunity. Gut microbiome is essential for immune cell recruitment and differentiation.

In particular, the segmented flamentous bacteria have been found to promote autoimmune arthritis through an enhanced T17 response. On the other hand, lactic acid bacteria and Bifdobacteria are known to secrete factors that dampen inflammation by down regulating NF-κB dependent gene expression, IL-8 secretion, and levels of macrophage-attracting chemokines.

Microbial-derived SCFAs may be contributing via G-protein-coupled receptor and epigenetic mechanism, directly increase the abundance of T regulatory cells in the gut and protect against allergic airway inflammation.

Our gut microbiome has diverse effects on host immunity, and a balanced gut fora is critical for a healthy immune system. Besides immunity, gut microorganisms impact host metabolic health.

Individuals with metabolic disorders such as obesity and diabetes have been shown to have intestinal dysbiosis in relation to healthy individuals. In particular, obese individuals have a high baseline Firmicutes to Bacteroidetes ratio.

Intriguingly, hosts with a gut microbiome dominated by Firmicutes have altered methylation in the promoters of genes that are linked to cardiovascular disease and obesity. Additionally, Lactobacillus spp. have been shown to alleviate obesity-associated metabolic complications.

The beneficial effects of Lactobacillus may be attributed to interactions with obesity-promoting bacteria in the gut and direct modulation of host immunity and gut barrier function.  Interestingly, the mucusdegrading bacteria A. muciniphila has also been linked to a healthy metabolic profile. Obese individuals with a higher baseline relative abundance of A. muciniphila tend to have greater improvements in obesity-associated metabolic parameters (insulin tolerance, plasma triglycerides and body fat distribution) after dietary intervention.  Interestingly, germ-free mice are more resistant to diet-induced obesity, possibly due to enhanced fatty acid metabolism in the absence of certain microfora.

Together, these findings demonstrate the important role of gut microbiota in maintaining host metabolic integrity.

In conclusion diet can modify the intestinal microbiome, which in turn has a profound impact on overall health. This impact can be beneficial or detrimental, depending on the relative identity and abundance of constituent bacterial populations.

For example, it has been shown that a high-fat diet adversely reduces A. muciniphila and Lactobacillus, which are both associated with healthy metabolic states. This observation provides a good example of how dietary intervention might potentially be used to manage complex diseases, such as obesity and diabetes.

Furthermore, advances in microbiome research have suggested novel therapeutic possibilities for diseases that have traditionally been diffcult to treat. For example, the fecal microbiota transplant has been used successfully to manage several different conditions, including ulcerative colitis, Clostridium dificile-associated colitis, irritable bowel syndrome, and even obesity. It is possible that dermatologic conditions, including psoriasis and atopic dermatitis, may also be observed to benefit from re-engineering the gut microbiota.

Recent advances in microbiome research offer exciting new tools to possibly enhance human health. In order to investigate the microbiome’s functions, many researchers have turned to a shotgun metagenomic approach in which the whole bacterial genome is sequenced. Despite a higher cost and more complicated bioinformatics requirement, shotgun metagenomics provides information about both microbial identity and gene composition.

Knowing which genes are encoded by the bacteria present in a sample allows researchers to better understand their roles in human health. With reducing costs of next generation sequencing, improved sample preparation protocols, and more bioinformatic tools available for metagenomic analysis, this technique will be a powerful tool to study microbiome functionality. Performing meta-analyses to correlate the microbiome with host genomes, transcriptomes, and immunophenotypes represents another exciting avenue for investigating human and bacterial interactions.

Precision medicine is another attractive, novel therapeutic approach for many diseases with strong genetic associations. It is important to note that the host genotype also plays a role in shaping the microbiome, and that this host-microbe interaction is crucial for maintaining human health. Therefore, a better understanding of the interplay between genes, phenotypes, and the microbiome will provide important insights into the utility of precision medicine. The observation that diet can modulate host-microbe interactions heralds a promising future therapeutic approach. Already, the gut microbiome has been found to infuence the response to cancer immunotherapy. Indeed, personalized nutrition is an emerging concept that utilizes a machine-learning algorithm to predict metabolic responses to meals. This tool has broad implications for individualized patient care through dietary modification. While this and other technology is in the process of being refined and validated, further research using large, long-term clinical trials to evaluate a greater variety of food components would be helpful in making specific dietary recommendations to patients.

Department of Genetics and Bioengineering