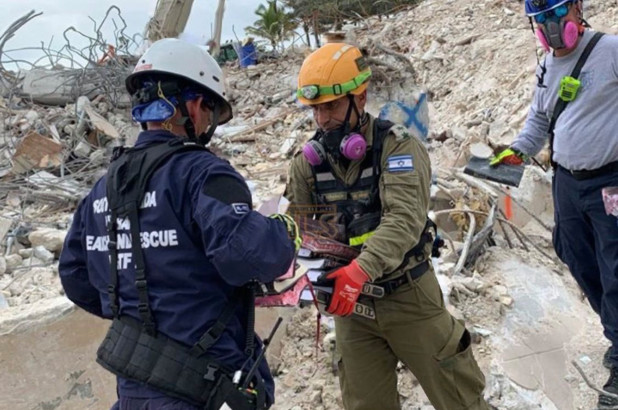 A photo that captured the commander of an Israeli military team in Florida handing a stack of Jewish holy books recovered from the rubble of the collapsed condo building to a local search-and-rescue team member has gone viral.

Col. Golan Vach and his crew worked alongside local rescuers to locate the bodies of a Jewish couple buried in the debris where the Champlain Towers South condo once stood, the Miami Herald reported.

As he gathered their personal belongings, Vach noticed that many of the books he came across were from the Talmud, the central text of Rabbinic Judaism and the primary source of Jewish religious law.

A photographer snapped the photo of him handing over several blue books to a South Florida Urban Search and Rescue team member – and the image soon spread across American Jewish social media and WhatsApp groups, according to the paper.

Commenters around the globe took note of the symbolism of rescuers saving holy texts amid the tragedy, whose death toll Thursday stood at 54, with 86 people still unaccounted for.

“It was special in this event to do your holy mission to get these things back to their families,” Vach told the Herald, noting that under Jewish law, religious texts are not to be discarded.

If they are irreparably damaged, they are to be buried with the same care as a person.

“We are doing this with very much dignity, very much respect,” he added. “We are trying to do this mission the best we can.”

All of the items recovered at the site, including the religious texts, are put into boxes and taken to a warehouse, where investigators look for evidence of what may have caused the collapse.

After they are inspected, they will be returned to the families, Vach said.

Harbour Mayor Gabriel Groisman, who tweeted the touching photo, said it represents the homes people built in Surfside and the loss they suffered when it crumbled.

“Everybody at some point is missing the physical items that they’ve lost in addition to the people they’ve lost,” he told the Herald.

“In the Jewish religion, we keep these books in the house. When you fill your house with Jewish text, your house becomes a home. To see those in the rubble is symbolic of the lives lost,” Groisman added.

Raphael Poch, a member of the Israeli group United Hatzalah, said uncovering the religious texts is “very, very significant” since books gained even more significance during the Holocaust, when they were burned.

Jewish books are often the first things people now try to rescue after fires in synagogues or homes.

“These are books Jewish people carried with them for thousands of years,” Poch told the paper.