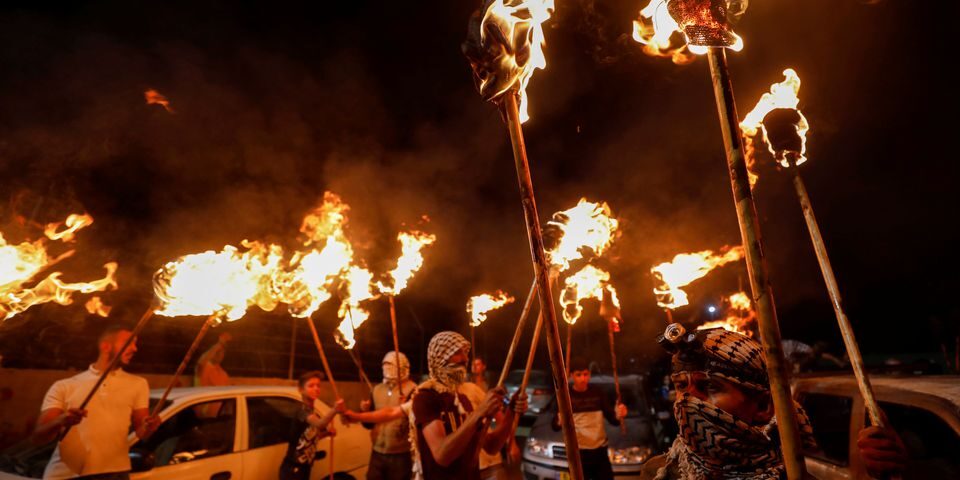 BEITA, West Bank, June 24 (Reuters) – In a fusion of the modern and the medieval, green laser beams and flaming torches light up the night sky in a remote part of the Israeli-occupied West Bank, as Palestinians wage a battle to stop a new Jewish settlement.

The “Night Disruption” protests south of Nablus are aimed at halting the rapid growth of a settler outpost that began in early May and is now home to 53 Israeli families on what the Palestinians say is their land.

Israeli troops have shot dead five Palestinians during stone-throwing protests since Givat Eviatar was set up, Palestinian officials said. The Israeli military did not comment on fatalities, but said troops used live fire only as a last resort.

The army has deployed soldiers during the night-time demonstrations, as well as at Friday protests in the nearby village of Beita which have lasted several months.

“We come at night, we light up the mountain, to send them a message that they can’t have even an inch of this land,” said one masked Palestinian this week. He lit fires while others flashed laser pointers to dazzle the settlers in their homes.

“The large number of violent rioters endangers the lives of Israeli civilians and a military force has been deployed to provide protection,” it said in a statement.

Protests against an Israeli settlement in East Jerusalem’s Sheikh Jarrah neighbourhood were one factor behind 11 days of hostilities between Israel and Gaza militants in May in which over 250 Palestinians and 13 in Israel were killed.

The settlers named the outpost after Eviatar Borovsky, an Israeli stabbed to death in 2013 by a Palestinian at a nearby road junction. The outpost has been built up and evacuated three times since then.

But it was set up without government authorisation – which makes it illegal under Israeli law – and presents an early test for new Israeli Prime Minister Naftali Bennett.

Bennett was once a senior leader of the settler movement and heads a far-right religious party.

But he sits precariously atop a new coalition that spans the political spectrum from far-right to far-left, making sensitive policy decisions on the Israeli-Palestinian difficult.

The Israeli military issued an order to evacuate the outpost on June 6. But that was under Bennett’s predecessor Benjamin Netanyahu, whom Bennett replaced on June 13.

The evacuation order has since been postponed, the Israeli military said, and Bennett has not said if he plans to implement it.

A spokesman for Bennett’s office declined comment, but the settlers are intent on staying on what they call “Eviatar’s Hill” and Palestinians call “Jabal Al-Sabih” or “The Morning Mountain”, because the sunlight strikes it early.

“They won’t drive us away from here. This is our homeland, this is our forefathers’ land. We love the land, we want to be here, we know they come out of hate,” said Eli Shapira, a 30-year-old teacher and father of four.

As construction proceeds, some settler families live in caravans. Some roads are already paved, and others are lined with electricity cables.

More than 440,000 Israeli settlers live uneasily among some 3 million Palestinians in the West Bank, land that Israel captured and occupied in a 1967 war but which Palestinians say is the heartland of a future state.

The Palestinians and most countries view Israel’s settlements as illegal under international law. Israel disputes this, citing historical and biblical links to the land and its own security needs.

Palestinian officials say the new outpost would help create an unbroken east-west line of Israeli settlements through the northern West Bank, cutting the territory in half and rendering Palestinian statehood unviable.

The site lies 30 km inside the West Bank in fertile olive and grape-growing territory for Palestinians around Nablus.

Nearby there are many hilltop Jewish settlements, whose residents want to extend their territory.

“Israel is a strong country and not only will we not be weakened, not only will terrorism not scare us or make us flee from our homeland – we will build more and more,” said Yossi Dagan, head of the Shomron Regional Council representing settlements in the area.

On Sunday Israel’s military rejected an appeal by the settlers against evacuation, saying the outpost “undermined security stability” in the area.

The settlers have until Monday to appeal to the Supreme Court, a military spokesman said, although the decision over the evacuation ultimately rests with Bennett.

Moussa Hamayel, Beita’s deputy mayor, said they had heard reports that the outpost might be dismantled. But he was sceptical.

“We don’t trust their promises, not until we see (the outpost) completely empty,” he said.Additional reporting by Rami Amichay; Writing by Rami Ayyub; Editing by Stephen Farrell and Mike Collett-White