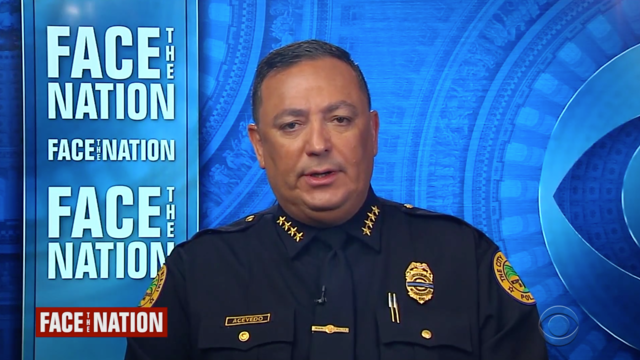 screen shot at am

Washington — Miami Police Chief Art Acevedo, who used to lead the Houston Police Department, called a new measure approved by the Texas state Legislature that would allow people to carry handguns without a license “ridiculous” and urged Governor Greg Abbott to veto the bill.

“There’s something that God gave us and that is common sense, and common sense tells us that that is ridiculous,” Acevedo said in an interview with “Face the Nation” when asked about the legislation.

Abbott, a Republican, is expected to sign the measure approved by the GOP-led Legislature last week that further loosens gun restrictions in the state. The bill allows people to carry handguns in public without a license, background check or training.

While the measure is backed by the National Rifle Association, law enforcement groups and police chiefs in the state oppose the measure, known as “constitutional carry.”

Acevedo said that while Republicans claim to support law enforcement, enacting this law would not help Texas police.

“They only support the blue in word. It’s now time to support the blue in deed, by vetoing that bill,” he said. “You’re either with law enforcement or you stand with the fringe that believe that everybody should have a firearm regardless of their character, their capabilities or their mental capacity.”

The move from the Texas Legislature comes as the nation sees an increase in crime, with homicides and aggravated assaults rising so far in 2021, according to the Major Cities Chiefs Association. Early Sunday, two people died and more than 20 were injured in a shooting outside a concert at a banquet hall in Miami-Dade County, Florida.

Acevedo said the shooting is “an indication of the problem we have with the scourge of gun violence in this country that we need to do much more at a federal level to stop.”

The Miami police chief called for lawmakers to “come out of their own corners” and work together to craft legislation to combat gun violence, which he said should require universal background checks and make burglarizing licensed gun stores a federal crime.

“We need the federal government and both sides to address this issue because without legislation, without certainty as it relates to holding these criminals accountable, we’re never going to get through the summer without much more death and destruction,” he said.

Acevedo also lamented the backlog of cases in the court system, which has been exacerbated by the pandemic.

“Our criminal justice system is at a standstill,” he said. “It’s time for the president, Congress and governors to get our court system up and running. It’s OK to focus on making policing better, but I assure you, there weren’t 30 police officer shootings in Metro Dade County this weekend. The American people deserve greater safety.”

President Biden, too, has called for the Senate to approve two House-passed bills strengthening background checks, though the measures face an uphill battle to passage in the upper chamber.

Acevedo, though, said he and his colleagues in law enforcement fear gun violence will only continue to worsen if Republicans and Democrats fail to reach consensus on legislation to address a surge in crime.

“Unless we all start speaking up, speaking out and demanding our elected officials take action, we’re going to see a lot more bloodshed,” he said. “And I’m very sad to say that this summer’s going to be a long summer for the American people.”© 2021 CBS Interactive Inc. All Rights Reserved.