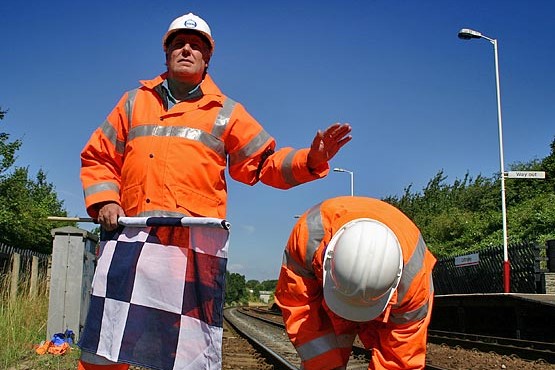 Network Rail is accelerating plans to eliminate unassisted lookout working on the UK’s rail network following the death of a worker in London in February.

Tyler Byrne from Hampshire, was struck and killed while working on the track near Surbiton, south-west London.

His death sparked anger from the Transport Salaried Staffs’ Association (TSSA), which has called for a “full and thorough” investigation.

An RAIB investigation is ongoing, however early reports indicate that 30-year-old Byrne was one of four track workers undertaking a regular planned inspection of switches and crossings while the lines were open to traffic “with arrangements in place to protect staff from train movements”.

Plans to phase out human lookouts were already in motion as part of trackworker safety improvement notices set in 2019.

However, Network Rail board minutes from the March – but just made public – reveal that Network Rail has asked each of its 14 routes to draw up accelerated plans to eliminate the practice of unassisted lookout working as a direct result of the Surbiton tragedy.

That includes wherever possible, replacing human lookouts with protection and warning technology to alert groups of workers to approaching vehicles on the track.

The minutes add that 10 of the routes have committed to achieving this by the end of next month, with a further three committing to eliminate the practice by the end of the year.

A Network Rail spokesperson confirmed that Scotland and Western routes have already achieved 0% lookout working, with all other routes on track to hit the target by the end of July “with the exception of West Coast South, North West and Central which are all forecasting 31 December 2021”.

The minutes add that a “safety framework” is also being developed “to bring together all safety expectations”.

It adds: “[The safety framework] would drive further personal accountability for safety matters and would include refreshed ‘life saving rules’.”

The framework would address five areas:

“Near misses and fatalities should never be seen as inevitable,” Cortes told NCE. “Yes, we need an end to the ‘person with a flag’ so-called protection for track workers, but it’s not just a case of replacing the flag with a modern technological equivalent.

He added: “We need to see an end to track work being carried out while trains are moving through the worksite. We need to see genuinely safe procedures for getting workers from location to location.

“Network Rail’s operating model is on a devolved basis. At times it appears to be fragmented and all too often we see the emphasis being put on performance as opposed to safety.

“To ensure track worker safety we need to introduce effective levels of compliance with real accountability and effective assurance. The planning and delivery of safe work can only be improved by providing more resources and investment in technology and people.”

Following the death of Byrne, Cortes said its members had warned Network Rail about the “alarming number of near misses and fatalities” that had happened over the past year.

“Our Network Rail members do so much to keep our railways running smoothly day in, day out, and must be able to do this in a safe environment,” he added. “Our union will never compromise on safety, and safety can never be taken for granted. It is simply not acceptable in this day and age that people go out to work and end up losing their lives.”

This is the latest incident of a rail worker being struck by a train in recent years. Another track worker was killed while carrying out civil engineering tasks near Roade in Northamptonshire on 8 April last year, which followed the double fatality in Margam in July 2019.

A report by the Rail Accident Investigation Branch (RAIB) concluded that a number of safety failings contributed to the tragic events in Northamptonshire.

Among its findings, the RAIB concludes that AmcoGiffen employee Aden Ashurst had become “habituated to warnings from approaching trains” and therefore “did not look towards the approaching train on hearing its warning horn”.

He established A 100-strong taskforce in January 2020 to work on improving safety of track workers following the fatal accident at Margam, near Port Talbot.

Speaking to NCE in June last year, Haines said that there are four key elements to the track worker safety taskforce’s work.

“One is about how we plan and undertake maintenance,” he said. “We have had a major breakthrough on that as a result of Covid-19 as it has forced us to make progress with risk-based maintenance in a way that people on some routes were really struggling to get to grips with.

“The second is the technology to protect people so that when they are out and about. Previously the use of devices like track service operating devices and other protections was spasmodic and not consistent across the network but we are now rolling that out.

“The third is about signaller workload and the use of line blockages. That is one area where we have had a challenge in the Covid-19 context because of restrictions on access to signalling centres that has limited non-essential people in these centres so we have lost a little bit of time around that which feeds into engineering access statements and the timetabling process.”

The last one is culture and Haines says that this is going to be “the big nut to crack”.

“Those of us who have been around the railways for some time will know that actually have a long deep-seated culture and that has some brilliant values and makes people loyal and committed to their work,” said Haines.