On the Vast and Multitudinous Worlds of the Library 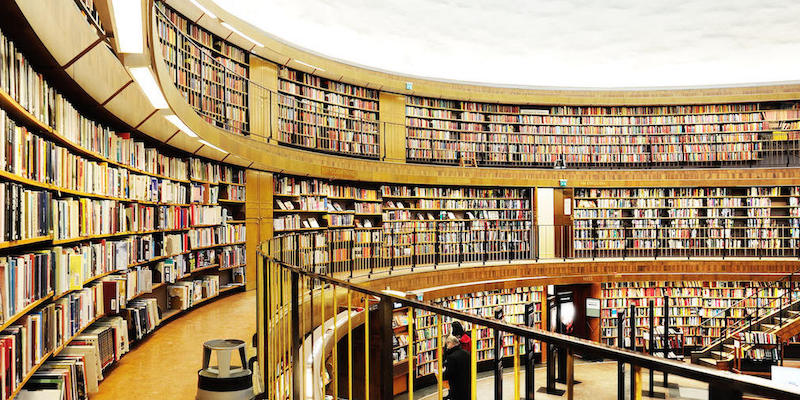 When introducing the library, I often ask people to imagine themselves in a museum. Although they are both institutions that exist to preserve and share things, museums and libraries position themselves differently. Museums contain objects arranged in settings that elevate their perceived importance. Close your eyes and picture a museum. You might see uniformed guards and barriers to keep you at a safe distance from the items hanging on walls and displayed in glass vitrines. Probably you aren’t picturing yourself physically interacting with the objects, unless you like to imagine yourself getting in trouble.

If, instead, you picture yourself in a library, your imagined experience is likely much different. Libraries recede into the background of a user’s experience. Personal interactions with books and other media are foregrounded rather than the objects themselves. A museum is important. A library is for you.

I should maybe stop here and say that I don’t have anything against museums. I worked at one in graduate school, and for a while I was convinced that I wanted to become an art museum librarian, a very niche and museum-loving sort of thing to do. In fact, even if I think of museums as positioned opposite libraries on a spectrum of humility and arrogance, sometimes arrogance can be a useful tool for institutions that are constantly under threat.

Museums are experts at trading in their perceived societal importance. The annual Met Gala, a benefit for the Metropolitan Museum of Art’s Costume Institute, is a perfect example of this. Each spring, celebrities and socialites work to outdo one another in responding to the event’s theme. The red carpet portion of the event now rivals the Academy Awards for media coverage, and it was even the centerpiece of the film Ocean’s 8. According to the New York Times, in 2017, the event raised over $12 million.

Libraries look at these threats and adopt a different strategy. The library I work in is part of a system of over 11 million volumes. If you were patient enough, you could have personal access to every single one of those, from ancient sheets of papyrus to born-digital books that have never been released in print. This is why I say that libraries are for you. Both libraries and museums are concerned with preserving their holdings, and the inner workings of each contain people dedicated to this effort. But the public-facing parts of a museum are really not about their objects so much as a succession of curators interpreting and presenting their materials. As visitors, we see only the tip of the iceberg in terms of museum holdings; most of what they own is kept away from public view in carefully controlled storage areas. What you get to see is always through someone else’s lens.Although they are both institutions that exist to preserve and share things, museums and libraries position themselves differently.

Libraries, instead, devote relatively little real estate and resources toward interpreting their collections, instead foregrounding the individual’s experience with the materials. Another person’s ego doesn’t stand in the way of your access to, at our library, a letter handwritten by Galileo and the first cookbook published by an African American. That’s how important you are to us.

Our current age, though dominated by characters who champion self-reliance, is seeing a rise in library use

Even if libraries contain rare, valuable, or one-of-a-kind resources, they usually don’t exert much effort promoting these objects, particularly when compared to museums. They are obsessively concerned, by contrast, with providing pervasive access to all of their items. My library, for example, holds more writings on ancient papyrus than any other institution in the Western hemisphere. These objects are available literally nowhere else in the world. But you’d never know it when you walk in the door. Instead, you’ll probably see information about the new version of our online catalog. In other words, who cares that some of the things we have are particularly special, even to many people? What really matters is that you can find what you’re looking for.

Sometimes I make the mistake of attempting to visit a library as if it is a museum. Recently I traveled to Salt Lake City for a conference. The event offered tours of the Family History Library, which is the world’s largest collection of genealogical materials. I eagerly signed up, but when I got there, I was surprised to find that it looked like, well, a library. There was a small interactive area much like the displays in a children’s science museum, with opportunities for selfies with digital ancestors. But beyond that, there were stacks of regular- looking books and large cases of microfilm reels. I realized that because I hadn’t prepared some questions about my own family, my time there was rather pointless, and I felt sheepish to have traveled such a long way to come to this conclusion as a professional librarian.

Some libraries, though, are more like museums to us, or at least hybrids. The New York Public Library’s famous flagship branch on 42nd Street or the Library of Congress in Washington, D.C., for example. One could be forgiven for showing up at either of these locations without a research question, and in fact I have done just that at both. The leader of the latter institution is one of the few librarians people have (possibly) heard of: Librarian of Congress Carla Hayden. In an essay in the New Yorker, “The Librarian of Congress and The Greatness of Humility,” Sarah Larson characterizes Hayden’s mission in Washington D.C. as essentially to bring the lofty, museum-like institution back down to earth, aspiring to emulate the bustling, lively Baltimore Public Library system she used to direct.

Explaining the massive Library of Congress facilities to readers, Larson suggests that, like Hayden, they embody a paradox of “greatness and humility—the interplay and tension between them, the importance of both—seemed to echo across each gleaming stairway and emanate from each carefully labelled acid-free folder.” The greatness, the cathedral-like setting, and the sense that the institution is important even if most people don’t understand what it does—these attributes make the Library of Congress a kind of hybrid museum-library, a vaunted status shared by only a few other libraries in the world. However, Hayden’s service-driven mission reflects the dilemma of being valued without being relevant or particularly embedded in people’s real lives.Some libraries, though, are more like museums to us, or at least hybrids.

A focus on community has served the public library well in a society in which young people are eschewing ownership. Even some who have amassed fortunes in the tech sector, for example, have walked away to live simpler lives less burdened by belongings. They thus become unexpected allies of people who have always depended on community—marginalized and disadvantaged populations. In our community, a recently renovated branch library with elegant, comfortable furniture and a cozy fireplace is an office for entrepreneurs working from home as well as a place to use a free computer and stay out of the elements. In holding steady to a model of sharing, the public library has become a cultural darling, hosting standing-room only sushi demonstrations and Bob Ross painting events, despite echoes of doom still ringing in the ears of those who preached a model of everyone for themselves.