Telling the True Stories of Ancient Greece Through Fiction 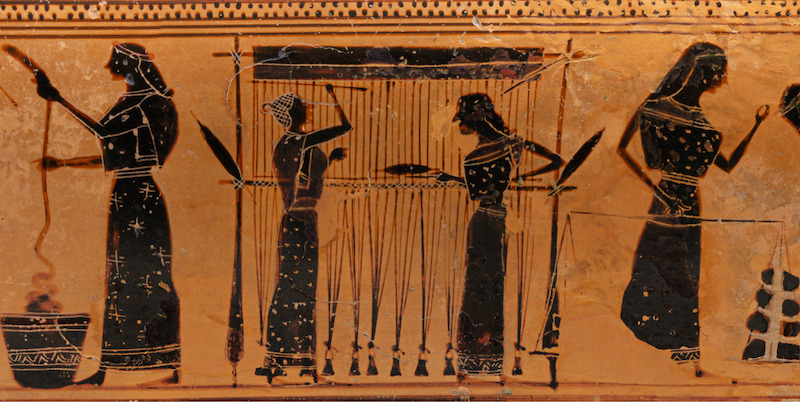 Klytemnestra! Have a care, girl! Your spindle’s gone all a-wobble!”

Klytemnestra’s eyes snapped into focus at the sound of her name. In front of her the spindle bobbed, her carefully spun wool unravelling quickly. She stopped it with her hand.

So begins my debut novel, Daughters of Sparta, a retelling of the Trojan War from the perspective of its two most vilified female characters: Helen of Troy and her sister Klytemnestra. When I set out to write my own version of the myth, one of the most enduring in world literature, I knew that I wanted to center these women within their experiences, to make them real people who might have lived during the Greek Bronze Age rather than constructs within a male-dominated narrative. But how could I really know what such lives had been like? With the proposed date of the Trojan War (if it ever occurred) being more than 3,000 years ago, archaeological evidence from this period is limited and historical records nearly non-existent. One thing I did know however, from my background in the study of Classical art and literature, was that the women of ancient Greece were closely connected with the production of textiles.

This connection was in fact largely exclusive. Wool working was women’s work. They spun, they wove—both free women and slaves, high class and low. Before mechanization the production of clothes was incredibly labor intensive, and would have taken up much of women’s time. Greek pottery is filled with images of women at the spindle or loom. The accessories of wool working became almost an artistic shorthand for domesticity and respectable femininity, and this ideal was reflected in myth, where the goddess Athena was patron of handicrafts and of weaving above all. There are stories of women creating wondrous artworks, elaborate scenes depicted in wool, and women skilled in such work were highly valued—sometimes literally, as slaves.

However the products of their labor do not survive to us. Textiles, unlike pottery, metalwork or sculpted stone, cannot endure the passing of millennia. Thus the artistic achievements of ancient women are silent, much as their voices are in the stories told about them. There are archaeological traces of course—spindle whorls and loom weights are abundant in excavations. But though these items are enough to say ‘women were here’, they can tell us little about the lives beyond the loom.I wanted to center these women, to make them real people who might have lived during the Greek Bronze Age rather than constructs within a male-dominated narrative.

As part of the research for my novel I wanted to connect more practically to these women than I could through reading books or studying archaeological evidence (though I did a lot of that too). I decided that I would learn to spin wool by hand, using a traditional drop spindle just as a Bronze Age woman would have done. I knew wool working was important to the story I wanted to tell. Not to the plot, perhaps, but to the texture of the world I was creating—the stifling, repetitive domesticity to which Helen and Klytemnestra find themselves enchained.https://3c088167ed6aa04f3f9ebce7b485375d.safeframe.googlesyndication.com/safeframe/1-0-38/html/container.html

My characters, like the historical women they represent, spend a lot of their time spinning and weaving. Between their private dramas, their heartache, their world-altering struggles for autonomy in a patriarchal world, the sisters work wool. I wanted to be sure that I had described these tasks faithfully, so the best way was to try it myself. I was lucky enough to work at a city farm which kept sheep, and so I even tried spinning with raw wool freshly shorn, still full of all the natural grease and smell and texture, and ran a few workshops where I taught local children how to spin. There is something special about engaging in an activity which has barely changed over thousands of years, and it helped me to feel in some small way that I was connected to all those women who had spent their lives with a spindle in hand.

It was not only the practical aspects of wool working which inspired my writing, but its place in ancient stories. The wife of Odysseus, Penelope, famously used her weaving skills to thwart the many suitors who harassed her while her husband was making his long journey home. Under pressure to choose one of them as her next husband, she promised that she would make the decision as soon as she had finished weaving a funeral shroud for her aged father-in-law. Though she worked on the shroud each day, at night she would secretly undo her progress—a ruse which she is said to have kept up for three years! Not only did Penelope become an emblem of marital fidelity but also of female cleverness—both tied to her work at the loom.

Another woman in Homer’s Odyssey, less well known but memorable to me, influenced my desire to put spindles into the hands of my characters. When Odysseus finds himself washed up on an unknown shore he is discovered by the Phaeacian princess, Nausicaa, who tells him that the way to secure help and safe travel home is to appeal to her mother, Queen Arete. Though her father Alcinous is king, it is clear his wife is the one really pulling the strings. When Odysseus arrives at their hall, he finds Queen Arete busy spinning purple wool, and this image of a queen, as powerful if not more powerful than her husband, working away at her handicraft amid her other responsibilities, stuck with me. It directly inspired a scene within my own novel, of Queen Leda busy in her hall.

Her mother continued with her spinning, lips silent. She eased the rich purple wool from distaff to spindle, coaxing it down through her long, pale fingers. Helen recalled the touch of those fingers on her skin. The soothing coolness of them, the roughness from years of working the wool. A woman’s hands were never still. Even a queen must spin and weave and stitch.https://3c088167ed6aa04f3f9ebce7b485375d.safeframe.googlesyndication.com/safeframe/1-0-38/html/container.html

I found inspiration too in Homer’s Iliad, particularly in Book 3 as this is the only real section in which the famous Helen of Troy participates as a character. As Paris and Menelaus square up for a duel, we find Helen in her chamber, weaving a great tapestry of the battles between the Trojans and Greeks, “endured for her sake”. When Helen is given so little voice in the Homeric epics, tales told about the war she supposedly caused, it feels poignant that we should see her here creating her own narrative of the war, woven in wool. What would she have said, if she had been given chance to speak? What version of the story would she tell? This was a question I wanted to answer.

My aim then, in writing Daughters of Sparta, was not only to shed fresh light on an ancient story, but to make its female characters live and breathe, as historical women with a mythical legacy. I wanted to give a voice to the voiceless—not only to Helen and Klytemnestra, who have existed for three thousand years within the frames that male writers, artists, and translators have made for them, but to the ancient women who lived forgotten lives. Like the beautiful cloths they created, their experiences are lost to us. I hope that Daughters of Sparta can bring their silent history to the page.