The Long and Abundant History of Britain and Its Gardens 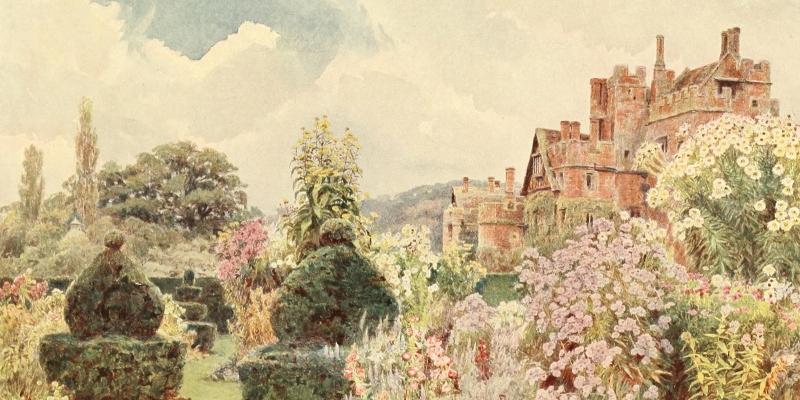 Although it is sometimes asserted that the English have an innate love of gardening, it seems far-fetched to suppose that they have an instinctive ability to plant a shrub or prune a fruit tree. Nor can it be assumed that the suburban gardeners of the late 19th and early 20th centuries had acquired a knowledge of gardening in some rural idyll of a cottage garden, knowledge that they then transferred to the suburbs. Although there continued to be some small movement of people from agriculture into the urban areas, England was already so urbanized by the middle of the 19th century that most suburban residents would have been born and brought up in towns and cities. Ebenezer Howard, the founder of the garden city movement, realized this when he praised the idea of attaching half an acre of land to each government-funded elementary school to “give the young an interest in horticulture.” Working-class gardens in rural areas in the 19th century were also not a good model. Flowers were grown, as Margaret Willes, a historian of working-class gardening, has shown, but the contents of cottage gardens—which gave far more space to vegetables, or even to keeping a pig—were very unlike those of suburbia.

New gardeners learn, of course, from their parents and from friends and neighbors; gardeners are never shy of offering advice. They exchange seeds, lend tools, and transmit gardening lore—and probably myth. One source of information (as well as another kind of spending on gardens that doesn’t count towards the $7 billion) is the printed word— books and magazines. Books on gardening date back to the Middle Ages; Blanche Henrey’s bibliography of British books on botany and horticulture lists 376 publications, counting each edition separately, for the 16th and 17th centuries, while many more were published in the 18th. The catalog of the British Library, which by law receives and preserves a copy of every book published in the British Isles, lists 137 books that appeared in the 1820s with the word “garden” or “gardening” in the title (excluding a number about Covent Garden in London). The number mounts from decade to decade with scarcely a check: 296 were published in the 1890s, and 539 between 1900 and 1909; by the 1970s it was 1,462 and, between 2000 and 2009, it had risen to 2,508. The total from 1820 to the present day is 15,652. It is an imperfect indicator because it includes some books published overseas and purchased by the library and some on entirely different topics, such as the Garden of Eden.

Above all, we have only fragmentary knowledge of how many copies were sold. One of the earliest, John Evelyn’s Sylva of 1664, sold more than 1,000 copies in less than four years, and many subsequent editions were published. John Claudius Loudon’s huge Encyclopaedia went through eight editions between 1822 and 1878; in 1846, Jane Loudon’s Ladies’ Companion to the Flower Garden sold more than 20,000 copies. Some recent gardening manuals sell hundreds of thousands of copies.New gardeners learn, of course, from their parents and from friends and neighbors; gardeners are never shy of offering advice.

Another indication of the appetite of gardeners for knowledge is the publication of magazines. Curtis’s Botanical Magazine, now published by the Royal Botanic Gardens at Kew, first appeared in 1787 and sold more than three thousand copies of its early issues, at $91 (1s) each. It was followed by the Botanical Register in 1815, by Loddiges’ Botanical Cabinet in 1817, and by Robert Sweet’s Flower Garden in 1828, each with hand-colored printed plates that were their principal attraction. John Claudius Loudon’s Gardener’s Magazine, initially priced at $247 (5s) a copy, gave him an annual income of between $489,000 (£500) and $733,000 (£750). This didn’t last, and in the 1830s, despite the fact that the price per copy had fallen to $59 (1s 2d) by 1834, cheaper rivals, such as the Florist’s Magazine, cut into his market; helped by reductions in taxes on paper and advertising, its owners were able to sell more than ten thousand copies at $24 (6d) each. This was also the price of Joseph Paxton and John Lindley’s Gardeners’ Chronicle, probably the most successful and longest lasting of the 19th-century magazines, which began publication in 1841.

Some books, such as Jane Loudon’s various volumes under the title of the Ladies’ Flower-Garden (1841–48), began life as monthly issues, later being sold as bound volumes. Their market was clearly the new suburban villa: “a lady, with the assistance of a common laborer to level and prepare the ground, may turn a barren waste into a flower garden with her own hands.” Her book The Ladies’ Companion to the Flower Garden stayed in print for over 30 years. However they were published, garden books and periodicals seem to have been lucrative. Later in the century, William Robinson, the proponent of the naturalist style of gardening, is thought to have made a large fortune from the Gardening Illustrated magazine. By that time, every popular newspaper had gardening columns, dispensing advice and describing gardens to be emulated. When Ideal Home was launched in 1919, it set out its stall: “readers will find this journal of very decided assistance in not only the Ideal Home, but likewise the Ideal Garden without which the former would, of course, be incomplete.” There were even various series of cigarette cards in the interwar years devoted to suburban garden designs. More recently, in the 1960s, the five principal gardening periodicals are said to have sold, usually on a monthly basis, 2 million copies between them.

Many of the specialist journals founded in the 19th century were aimed at the large garden owners—who could afford them—although they might be passed on to their head gardeners and, from them, to the journeymen and apprentices; Loudon and other garden writers urged employers to provide a library of books and magazines as a form of self-education for gardeners. But they were succeeded, in the late 19th and throughout the 20th century, by a plethora of books and magazines designed for the smaller garden, although the definition of that varied. F. M. Wells, in The Suburban Garden and What to Grow in It, published in 1901, was thinking of “slightly more than half an acre of freshly cleared ground,” while Brigadier C. E. Lucas Phillips, whose The Small Garden was first published in 1952 but is still in print, had “borne in mind a limit of about an acre, but with special consideration for suburban gardens of less than half that size.” Few books were aimed explicitly at the more typical, smaller, suburban garden, whose owners were expected to adapt the advice for their limited space, but several warned against the tendency to try to cram into the suburban back garden all the features—rockeries, pools, statues, and arbors—of the larger villa gardens. A model garden designed as a suburban plot at the Chelsea Flower Show in the early 1930s adopted a more restrained approach.

Then, in the 20th century, came the radio, the television, and, finally, the internet. The BBC had begun to broadcast talks on gardening from soon after its inception in 1922, but it was Cecil Middleton, who began broadcasting in 1931 and was given his own program, In Your Garden, in 1934, who made the real breakthrough. His appeal was summed up by a friendly critic: “[Mr. Middleton] will assume that your soil is poor and your pocket poor. All he asks is that your hopes are high and your Saturday afternoons at his service.” His program continued until his death in 1945 and, at its peak, had 3.5 million listeners. He was even able to become, in 1937, the first television gardener, with a special garden built for him at Alexandra Palace in north London.Gardening television programs abound, several of them with spin-off gardening magazines; this is supplemented by a huge range of websites, led in Britain by the Royal Horticultural Society, which has about half a million members.

He was the first of many. Gardening television programs abound, several of them with spin-off gardening magazines. There are televised visits to gardens, demonstrations of how to take cuttings and plant shrubs; there are garden makeovers with decorative presenters; there are commemorations of past gardeners, such as the plethora of programs about Capability Brown for his 300th anniversary in 2016. The gardens of various pundits are displayed weekly on television and then become visitor attractions. All this is supplemented by a huge range of websites, led in Britain by the Royal Horticultural Society, which has about half a million members. It freely dispenses advice, leads gardeners to plant species to suit their soils and conditions, and enables them to find nurseries at which to buy rare varieties. Social media such as YouTube provide hundreds of guides to every task in the garden. The website of the National Garden Scheme—supplementing the much-loved “yellow books”—makes it easy to visit gardens great and small, while the Parks & Gardens website reproduces the listings of more than a thousand historic gardens.