What the parable of Obamacare teaches Republicans 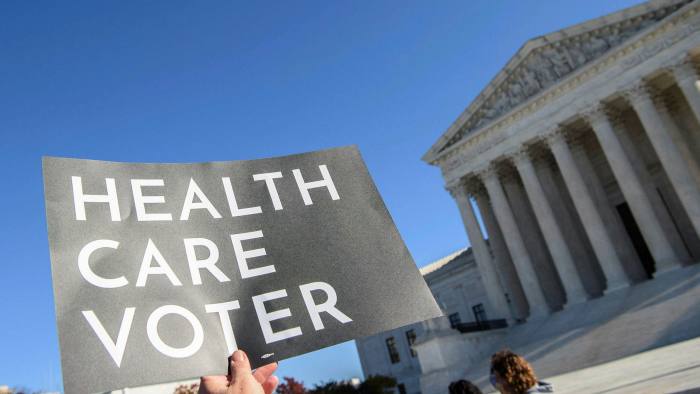 Please use the sharing tools found via the share button at the top or side of articles. Copying articles to share with others is a breach of FT.comT&Cs and Copyright Policy. Email [email protected] to buy additional rights. Subscribers may share up to 10 or 20 articles per month using the gift article service. More information can be found here.
https://www.ft.com/content/230b1803-b15f-49c4-8a57-06d768d545d3

It happened to “Impressionism”, “meritocracy”, “Baroque” and even “Tories”. Each was called such by its mocking enemies. Each became established and confident enough to embrace the name. The word “Obamacare” has travelled this arc from insult to brag at a quicker pace than most. Just over a decade has passed since the tricky birth of the Affordable Care Act, which hostile Republicans named after its presidential author. What ensued in 2010 was a midterm rout from which Barack Obama never truly steadied. Neither side in that election — the Tea Party’s breakthrough — expected the act to become part of the furniture of American life. Here it still is, though, unloved but entrenched. Long before the Supreme Court upheld Obamacare last week, Democrats called it by that name. Various iron laws of politics are borne out by the Obamacare saga. For one, the growth of government is easier to prevent than to retroactively undo. Once it is enacted, voters prefer the tangible reality of a federal entitlement over the airy prospect of tax cuts or “freedom” without it.

This is why the supposed neoliberal age — from 1980 to about five minutes ago — reversed precious little of the mid-20th century welfare state. At some point, the fad for reducing those 40 complex years to a free-market pillage will stop. Another revelation is that the Supreme Court is “conservative” in the old sense. Once a law has settled into national habit, judges tend not to rouse the sleeping dog. Institutions seek to survive above all, and a court that bucked the public too often would fail in that goal. Those who dream of major reform to Roe vs Wade, the half-century old ruling on abortion, should temper their hopes accordingly. Of all the lessons of the Obamacare years, though, the foremost is the one that needed saying least. There is no future for the Republicans as a small-government crusade. In fact, there is not much of a past for them either. On the one occasion the party won the popular vote in a presidential contest since the end of the cold war, 2004, it had just widened, not cut, public healthcare. Republican menaces against the ACA hurt them in the 2018 midterms (which the Democrats fought as a single-issue campaign) and beyond, until even conservative media pressed them to stop. In the previous decade, it was social security that Republicans tried to part-privatise. The abolition of Christmas would have earned a warmer hearing. The only Republicanism that can win an absolute majority has been obvious for years. It is one that declares a truce with the welfare state, the better to run on fighting crime, securing borders and putting woke to sleep. If it avoids the most feral populism — a fanciful “if” right now — the party can win a culture war. It can only ever lose a class one. The oddity of US politics is that the electoral sweet spot is so clear and so underserved. As in most rich democracies, the marginal voter is someone who fears the vagaries of the free market and too much culture change. In Britain, the Tories have answered both anxieties well enough to be electorally ascendant.

Germany’s Christian Democrats have always paired redistribution with traditional mores. That paternalism should course through a party as historically religious as the Republicans. It was there under Dwight Eisenhower, Richard Nixon and — fitfully — under George W Bush. The decade-long quest against Obamacare is unimaginable under any of those leaders. It is not even good populism. Nor is it liable to change. On occasion, a young Republican will entertain patriotism as an economic commitment to fellow citizens, not just as flag-toting, anthem-warbling and other cost-free deeds. But almost all of these alleged reformers duck the policy consequences. “We are a working class party now,” tweeted Senator Josh Hawley last year. He then voted against President Joe Biden’s fiscal relief bill in March. He backed a federal lawsuit against Obamacare in 2018. If the act survives him and other assailants, it is not because it is an intellectual masterwork. It failed to curb the extravagance of US healthcare, which absorbs twice as much national output as the rich-world average.

Democrats themselves cannot agree whether to fiddle with Obamacare or transcend it with public provision for all. All the more damning, then, that Republicans have fought it to so little effect. For a decade, the party has said “repeal and replace”. For a decade, Americans have only believed the first bit. [email protected]