Bath Schools of Art and Design in Bath, UK by Grimshaw

As one of Japan’s ancient capitals dating from the eighth century, Nara has many historically significant structures and temples. A short drive west from central Nara is the compact city of Yamato Koriyama, which has several small villages set among rice fields and expansive farmland. Here there are still traces of traditional wooden houses with distinctive steep thatched roofs in the Yamato Mune style. Built over a century ago, these private houses were once common around Nara, but their numbers are decreasing due to modernisation and depopulation, leaving many vacant and dilapidated. Once collectively maintained by villagers who mutually assisted each other in repairs and rethatching, extant examples are challenging and costly to maintain.

Yamato House, which sits on a small hill down a narrow winding road overlooking rice fields in the distance, aims to respond to these challenges. Built in the Edo period around 150 years ago, the house has been lived in by the same family for several generations, undergoing a number of renovations in this time, and the current owners wish to continue living there: ‘Many young people are moving away from this area, but I would like to create a house that my children and their children can live in comfortably, and want to continue living in so I can eventually pass the house to them.’ Local practice Tadashi Yoshimura Architects worked with the owners to design a multi-generational home that could extend the life of the house for future generations. Since its establishment in 2008, the office has worked on various projects that often involve collaborating with local craftspeople to renovate traditional buildings.

The main design strategy architect Yoshimura proposed was to insert a new structural shell within the existing thatched roof that could house a second level to increase the living area, to be exclusively used by the owner’s son and his young family. Rather than extending the footprint of the house, the space under the steep roof is used to provide a new main bedroom, two children’s rooms and a bathroom. Made from structural plywood, the new shell improves the seismic performance of the building, which is one of Yoshimura’s top priorities: ‘Structural durability is crucial for the longevity of old buildings. Rather than purely formal explorations, I worked with the structural engineer to derive the optimal shape for the structure to ensure that the building can be used for a long time.’

The new shell maximises the available roof space while still differentiating between old and new. Air flow can be controlled by various openings, comprised of sliding screens on the sides and vents along the ridge, that draw in cool air from below and let hot air out above. The openings also allow communication and interaction between the households – the grandchildren can call out from their bedroom to their grandparents below.

Yoshimura lists three main considerations that motivated the design of the new roof structure. First, the client has many fond memories of the house and wanted to preserve as much of the original as possible. Second, the thatched roof has architectural value as it represents the local vernacular and is a part of Nara’s cultural heritage. Lastly, there are environmental benefits; the straw mediates humidity and the traditional lightweight bamboo construction performs well seismically. Due to the high maintenance cost of thatched roofs, the common solution adopted today is to cover the thatch with large metal sheets. Yoshimura acknowledges that it was not feasible to keep the thatch exposed due to the challenging upkeep and expense, but proposed using a higher-quality material: small tile-sized galvanised steel sheets that can last another 100 years. However, Yoshimura says, ‘It is a shame to cover up all the thatched roof as the straw becomes no longer visible. I don’t want to only preserve the roof by covering it up but also to celebrate it by making it visible from both inside and outside the house.’ By using glass on the gable side of the roof which faces the street, the thatch is visible to neighbours, especially those passing by at night-time when the lights illuminate the underside of the thatch, creating a warm glow.

The design has privileged the retention of original elements, often recycling them in innovative ways. ‘We demolished as little as possible’, Yoshimura says, ‘and tried to reuse elements where we could. Apart from the ceiling and some sliding doors, most of the original house is intact while other parts are repurposed to retain some memories from the past.’ Old sliding doors were reused as pantry doors in the kitchen, while old metal door handles were attached to the new sliding doors in the living area. The new materials introduced complement the existing old wooden structure with a palette of natural finishes including local sugi (cedar) and white washi (paper) that have a contemporary yet traditional aesthetic. Yoshimura believes that new and old elements should contrast with each other to bring out the best of both, rather than one imitating or competing with the other. 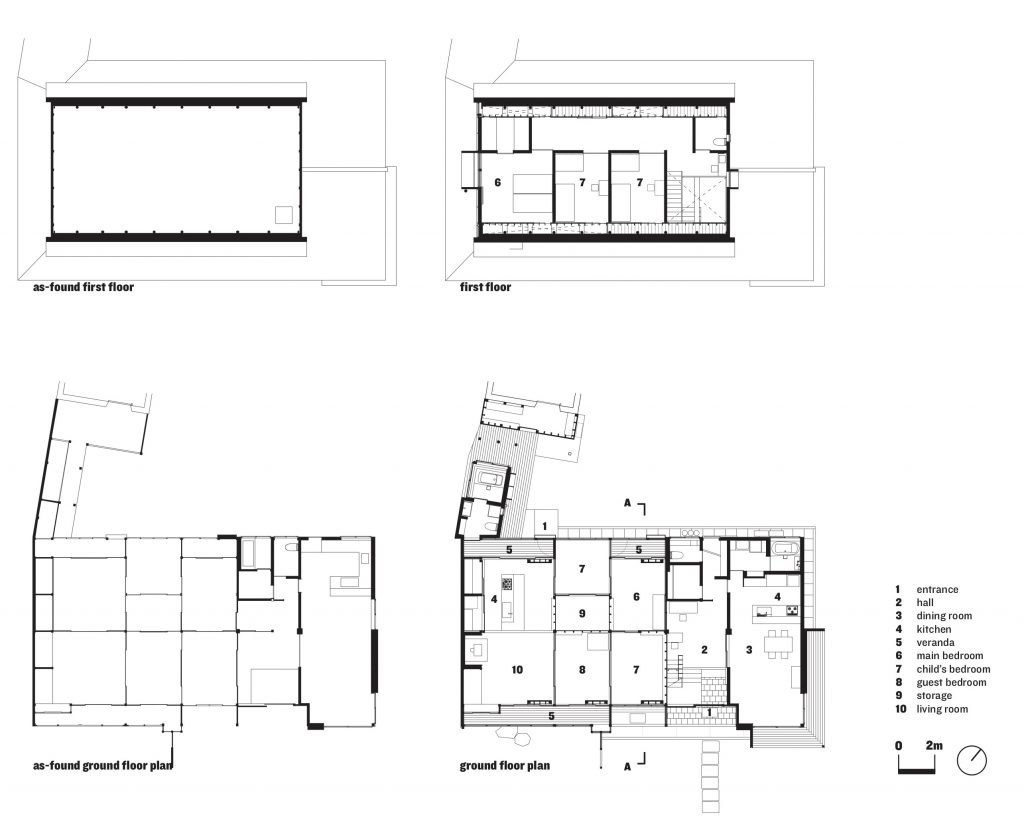 Another design priority was to recover what was lost in previous renovations. The veranda on the perimeter of the house was originally a semi-outdoor space that connected the inside and outside. At seat height and protected by overhanging eaves, the veranda was often used for both rest and work as well as an informal meeting area to communicate with guests and neighbours. Over time the veranda space became a storage area and was shut off from the outside when aluminium sash windows were installed. The new proposal reinstated the veranda area as an open and flexible space with sliding doors that allow the building to breathe once again. The owner rediscovered the veranda as his favourite place in the house: ‘I enjoy using the veranda space to work and relax. It brings ample light into the house and has made me feel more connected to the outside.’ He is also pleased that his grandchildren can now come and go freely while playing in the garden. With essentially separate residences with their own entrances, a careful balance of privacy exists between the households, and the garden and veranda have become communal spaces both families can share for spending time together.

The multi-generational family have been settling into their new home for three years. While the key ethos was to do more with less by reinstating passive design principles, the architect also installed modern-day conveniences such as air conditioning and a wood stove for heating. Comfort was a significant consideration as the owner is looking forward to spending more time there: ‘I am going to retire soon and want to live in comfort. Due to Covid-19, I have enjoyed spending more time at home, including working from home. Living in the house has made me feel more connected to nature and encourages me to live a healthy lifestyle, including having to cut wood for my wife to use to heat up the stove!’

In terms of spatial flexibility, the first floor offers a generous combined dining and living area that can be portioned off to use as a guest bedroom room with sliding doors. However, the children’s bedrooms upstairs have limited flexibility and do not have any windows or natural light. Yoshimura explains that it was difficult to make any openings directly to the outside as it would compromise the structural integrity of the roof. It may be a wise compromise as the children only sleep in the room and are encouraged to spend the daytime outside.

Yoshimura’s intention is for the project to engage with broader issues of depopulation and shrinkage in contemporary Japan. He hopes the house will contribute to the regeneration of the village by raising awareness of the potential of traditional houses and showcasing their charm. ‘It is not only architecture that can solve the problem, but architecture can improve communication with those around you and your neighbours.’ Yoshimura’s own 180-year-old house nearby is another renovated townhouse. ‘What we can do as architects is to open up buildings to the outside to engage with the community. In the past people did not lock their doors and neighbours often dropped by to visit each other. I also don’t have locks in my house, that is the beauty of the rural.’